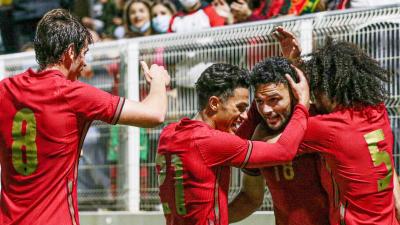 Portuguese football has for years been an extraordinary breeding ground for young talents who, after making a name for themselves early in their career, command premium transfer fees paid by the top clubs worldwide and go on to fully justify the money spent.

Rúben Dias, Bruno Fernandes and João Cancelo are just three recent examples of the quality of Portuguese players on the highest stage. All football fans will therefore be keen to learn about the latest up-and-coming Portuguese footballers from a variety of teams who could hit the big time.

Fábio Carvalho will move to Liverpool on 1 July 2022, when the summer transfer window opens. The 19-year-old from Torres Vedras played last season at Fulham, showcasing his technical skills and incisive attacking ability. In terms of matches and results he scored 11 goals and provided 8 assists between the Championship and FA Cup, achieving promotion to the Premier League with four matches to spare. The young Portuguese talent after playing in the English youth national team up to U18, decided to switch to the Portugal shirt, and has played for the Seleção U21 team 4 times, scoring 2 goals.

One of the most promising centre-backs in the Portuguese football league is undoubtedly Sporting’s Gonçalo Inácio. Still only 20 years old, he has plenty of experience with 66 first-team appearances for the Lisbon club over the last two seasons, including a Primeira Liga championship winner’s medal earned in 2020/21. As well as his reliable defending and excellent passing range, especiall with his cultured left foot, Inácio has a propensity for scoring goals, finding the net five times in the season just finished. Earlier this year he was called into the full Portugal squad for the first time, but had to pull out through injury.

With Nuno Mendes we are talking about a star already firmly entrenched at one of the most prestigious clubs in Europe, at only 20 years of age. PSG bought him last summer from Sporting and lining up alongside the likes of Messi, Mbappé and Neymar did not faze the left-back. Mendes made 40 appearances between Ligue 1, the Champions League and the French Cup. The class of 2002 is already a regular in Portugal’s national team, having earned 15 caps. His value in 2020 was €7m but now is a whopping €40m.

The son of former Portugal, Porto and Lazio star Sérgio Conceição, now also his coach at Porto, Francisco is rising to international football fame wearing the Dragons’ jersey. An extremely tricky winger with fast feet and mesmerising dribbling ability, in the 2021/22 season he scored three goals and provided four assists in 33 appearances. Chico (as he is nicknamed) is a regular in Portugal’s U21 team and is expected to flourish next season with Porto having sold or rumoured to be selling star players such as Fábio Vieira, Vitinha and Evanilson, leaving more room for Conceição to shine.

Powerful Benfica centre-forward Gonçalo Ramos has had something of a breakout season, establishing himself in the first team of the Lisbon giants by the end of the campaign and notching 8 goals in all competitions. With the sale of star striker Darwin Núñez to Liverpool, Ramos, who this week celebrated his 21st birthday, can expect a regular starting berth in Benfica’s side next season. Ramos has also been on fire for Portugal’s U21 team, scoring 12 goals in the U21 European Championship qualifiers which made him the top scorer in the competition across the whole of Europe.

Joelson Fernandes is originally from Guinea Bissau but the 19-year-old has Portuguese nationality. Last season he was loaned to Basel in the Swiss Super League, playing 23 matches with notching 2 assists. He will return to Sporting next season and hopes to convince Rúben Amorim to give him a shot in the first team. He has gone through the entire national team youth ranks, up to the U21 where he made 5 appearances.

20-year-old centre back Eduardo Quaresma is owned by Sporting but played on loan at Tondela in the 2021/22 season. The ball-playing defender made a splash when first breaking into Sporting’s first team in 2020, but saw his chances of playing time limited given the superb form of the likes of captain Sebastián Coates, the above-mentioned Gonçalo Inácio and Matheus Reis. Last season he played 25 games with 1 goal and 2 assists in the Liga Portugal Bwin. Like Fernandes, he will return to the Alvalade and attempt to convince coach Amorim he deserves first-team chances. He boasts 44 appearances in Portugal’s youth national teams, from U15 to U21.

Viewed as the most promising striker on the Portuguese football scene a couple of years ago, Wolves invested €40 million by purchasing him from Porto in the summer of 2020. He has struggled to make an impact in the Premier League, scoring just four league goals in his first two seasons in England, but at 19 years of age he is still learning his trade and has shown his eye for goal with Portugal U21s, hitting the net regularly including a hat-trick in the recent thrashing of Liechtenstein.

An extraordinary breeding ground of young football stars, it is nothing new that Portuguese football can compete and even exceed the top 5 leagues – Premier League, Spanish La Liga, Bundesliga, Serie A and Ligue 1  – when it comes to producing world-class talent. Televised football matches in the Liga Portugal Bwin are less watched than in more popular leagues, but can offer plenty of entertainment and showcase the new talents of world football.