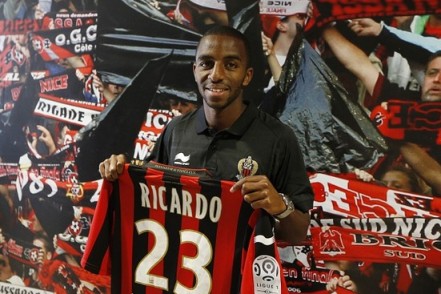 In a matter of weeks, Ricardo Pereira has gone from forgotten man at FC Porto to being one of Ligue 1’s biggest early season revelations. A loan move to Nice, combined with a change in position has reignited his career.

So far this season, the 22-year-old left-back has made L'Équipe’s Team of the Week twice, and most recently was handed his first senior international call-up for Portugal. From winger/striker, to right-back to left-back, PortuGOAL looks at Ricardo’s journey to stardom.

His story has been one of patience and perseverance. He played football with Clube Futebol Benfica in Lisbon before moving to the Sporting academy in 2004. At age 17, Pereira was released by the club. Instead of giving up on his dream, he joined Associação Naval 1º de Maio, a small club in Figueira da Foz.

After just one year, he moved further north to join Vitória de Guimarães, a club that was about to enjoy a resurgence under current Benfica manager Rui Vitória. He made only three appearances in his first season at the club. However, at youth level, he was quietly developing into a skilled winger (sometimes used as a striker) with an ability to score goals.

He would have his breakout season as a professional in 2012/13 making 27 league appearances, helping the Minho club finish ninth. In April 2013, it was announced that he along with teammate Tiago Rodrigues would move to FC Porto in the summer.

The move could not be made official until July, which was just enough time to solidify a special place in the history of Vitória de Guimarães. The club defied all odds to make it to the final of the Portuguese Cup that season. In the showpiece final at Jamor, at 1-1 with ten minutes to go, Ricardo beat Benfica goalkeeper Artur Moraes with a long-distance shot to sensationally put his club ahead.  Vitória held on to win the match 2-1 and claim their first ever major silverware.

It was a perfect ending to a dream season for him. He arrived at FC Porto amidst high expectations but things did not go as planned. The club was undergoing a period of major change. Manager Vítor Pereira, who had lead the club to two consecutive league titles, was replaced by Paulo Fonseca.

Ricardo (as he was now known as in Portugal) would spend the 2013-14 bouncing back and forth between the senior squad and the B squad, which plays its football in the Segunda Liga. It was also that season that Fonseca decided to use Ricardo as a full-back for the first time. He may have lost some of the attacking prowess that was so evident at Guimarães, but he did demonstrate a major improvement in the defensive side of his game.

Ricardo did not see much action under Julen Lopetegui last season, although he performed well on the few occasions he stepped in for Brazilian international right-back Danilo. But hopes that he would establish himself as Porto’s regular right-back after Danilo’s departure to Real Madrid were soon dashed when the club signed Maxi Pereira from Benfica.

This season at OGC Nice

At the end of this summer’s transfer window, Ricardo joined Ligue 1 side OGC Nice on a two-year loan deal. In a recent interview with Portuguese football website Maisfutebol, he revealed that it was the French club that insisted on the length of the term, and after consulting his agent, he agreed that it was in his best interest to leave.

“I will have an opportunity to play an offensive and defensive role. I think this is a positive. I believe a loan of two years was the best option. It will give me stability and help me progress,” he said at the news conference announcing his signing.

“I like athletes with good technical ability, who could bring a lot to the game. Ricardo has that characteristic,” Nice manager Claude Puel said at the time.

And it has proven to be an excellent move for everyone involved. Puel has used Ricardo exclusively at the left-back position to fill the void left behind by Jordan Amavi who left for Aston Villa in the summer.

Despite not playing regularly at club level for two years, he has adjusted very quickly to his new surroundings in the south of France. Ricardo recorded three assists in his first four matches at the club. The highlight was a brilliant 35-yard pass to a charging Said Benrahma near the end of Nice’s 3-1 victory against SC Bastia on 19 September. And the accolades were very quick to follow.

Well-respected football website Whoscored.com named Ricardo in their Team of the Month for September. He was praised as part of a special profile in their online magazine: “With great recovery pace and ability on the ball in attack, Ricardo looks to be an ideal replacement for Amavi.”

Ricardo has evolved into a very well-balanced player. He is blessed with good speed, which allows him to cover a lot of ground. He has also developed good positioning, tackling and defensive instincts over time, as he has evolved into a defender. In addition, Ricardo has yet to pick up a yellow card through his first six matches of the season.

But he has not lost his offensive skills. His passing, crossing and ability to beat defenders in one-on-one situations is what has caught people’s attention. As a winger, Ricardo was also known for his goal scoring touch. He scored six goals during Vitória de Guimarães’ 2012-13 Portuguese Cup winning campaign. And as a Portugal youth international, he scored an impressive 12 goals in 35 appearances in all competitions, playing primarily on the wing.

In terms of weaknesses, Ricardo has a short stature, standing at only 1.75m. This puts him at a disadvantage in aerial duels, although this is not a major problem in Ligue 1 where heading ability is not as valued as in other leagues. He is also on the thin side, which is another potential weakness. Still, there is time to work on his physique.

For now, Ricardo’s goal should be to continue to work on his consistency. Although, he has enjoyed an impressive start, he must prove that he can play at a high level for an entire season. His versatility and innate understanding of the game make him very valuable to any squad. And this could just land him a spot on Fernando Santos’ squad for the European Championships next summer.