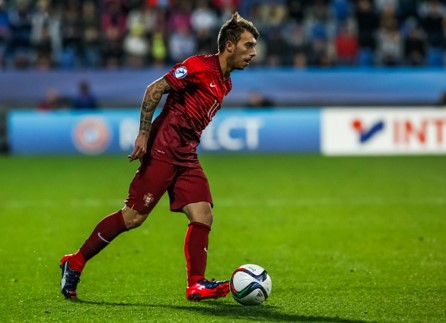 Iuri Medeiros put in another outstanding performance for Moreirense last weekend against Porto. The young winger again proved a handful for one of Portugal’s ‘Big Three,’ scoring the opening goal of the match and creating a second, before the Dragões were able to rally back for a 3-2 victory.

Medeiros has been a revelation for Moreirense this season, on loan from Sporting. The 21-year-old is making a good case to return to his parent club for next season. PortuGoal takes a closer look at rising star Iuri Medeiros.

Medeiros was born on the island of Faial in the Azores and started playing football at an early age for Sporting Horta. At the age of ten, he made the move to Sporting’s Alcochete academy.

After more than two seasons with Sporting’s B squad, he was sent on loan to Arouca in January 2015.  On 18 March against Benfica, he scored his first senior goal in impressive fashion. After receiving the ball at the edge of the 18-yard box, he fooled defender Eliseu with a clever move before firing a volley passed Júlio César.

A few weeks later, he scored a brilliant free-kick against Gil Vicente, and added two assists in a 3-1 victory. He made a positive impact at the club, scoring three goals in 17 league matches.

He was selected to Rui Jorge’s squad for last summer’s U21 European Championships and made four substitute appearances. He recorded an assist in Portugal’s 1-1 group stage draw against Sweden for a goal scored by Gonçalo Paciência.

In August, after not playing much during Sporting’s pre-season, he was sent on loan again this time to Moreirense in order to get more playing time.

Strengths, Weaknesses and Style of Play

Medeiros possesses excellent technical ability, skill and an innate understanding of the game. His dribbling and close control allow him to beat defenders in one-on-one situations. He is also known for his explosive left-foot and quick release.

Nominally a winger, Medeiros can play centrally as a ‘number 10,’ as well as a secondary striker. He has been used primarily on the right side this season with Moreirense. So far, he has recorded an impressive eight goals and eight assists in 20 league matches.

And he seems to elevate his game against tougher competition. He scored in Moreirense’s 2-2 draw against FC Porto back in September, to go along with a goal and an assist against the same opposition in the reverse fixture this past weekend.

He has also excelled against Benfica.  He scored Moreirense’s solitary goal in a 6-1 Taca da Liga loss to the Lisbon giants in late January, and added another one in a Primeira Liga match a few days later. And if you include his first goal with Arouca last season, Medeiros has three goals in four matches against Benfica in his career.

But Medeiros is still developing as a footballer. He needs to learn how to play within a team system, which is essential for any talented player. Still, this is likely to improve over time, providing he continues to play regularly. At 1,74m he is not much of a threat in the air.  And he remains quite lean and would probably benefit from putting on more muscle.

A place in Fernando Santos’ Euro 2016 squad is a long shot but not impossible. But he should continue to play a prominent role for the U21 squad as they hope to qualify for the 2017 European Championships.

Tiago in the pod made an excellent observation concerning the depth at wing for Sporting. As good as Luri is, will he play regularly over Gelson Martins, Carlos Mane, Matheus? We all know how important it is to play and play regularly. This move...

Tiago in the pod made an excellent observation concerning the depth at wing for Sporting. As good as Luri is, will he play regularly over Gelson Martins, Carlos Mane, Matheus? We all know how important it is to play and play regularly. This move to Moreirense has obviously paid off for Luri. I would hate to see him regress due to lack of playing time with his parent club.

Fact is Sporting have an a*****nce of talent for a limited amount of spots. An excellent problem to have and further reinforces what we already know about the amazing academy Sporting maintains. They keep churning out fantastic players and more importantly, their players get a chance to play with the big club.

Hopefully the recent trend at Benfica becomes the norm and not the exception. I think a very important lesson should be learned from the Bernardo Silva, Andre Gomes fire sales. I think it’s fair to say they have learned their lesson, with the confidence shown to Guedes, Semedo and Renato Sanches. I don’t know what schools Pizzi and Andre Almeida attended but they are only 25 and 26 as well.

A very good time to be a young Portuguese footballer. Seems to be a tidal wave of recent talent spilling out from Portugal. Hopefully whoever makes the decision in regards to Luri’s future keeps him playing regular top tier football. Many a career has been stalled and unfortunately in limbo when players make dumb decisions (cough-Bruma-cough).

I think the clubs in Portugal would do well with offering mentoring for the young players. Guys like Rui Costa, Luis Figo, Chalana, Pauleta would do right to assist. Who better to help a young player make the right decision then those who made them time and time again. The list of “could have been’s” out of Portugal is huge, I am optimistic this next crop of young talent will do better.

Iuri Medeiros is awesome. What I like about him too is he plays without fear. He's positive creative attack minded and has that confidence or nonchalant disregard for so called limits. So proud that he's a Sporting player and its gonna be awesome...

Iuri Medeiros is awesome. What I like about him too is he plays without fear. He's positive creative attack minded and has that confidence or nonchalant disregard for so called limits. So proud that he's a Sporting player and its gonna be awesome with him when he comes back. As Val said there is a lot of talent in Sporting's ranks now and that is key.

I remember some seasons ago when people used to criticize Sporting for not having depth, that yes we had a good starting lineup but that our depth wasn't there, and we didn't have enough quality off the bench. Well for sure now, that is not the case. Sporting has a load of talent now and the future continues to look even brighter. Two players that we already own that are loaned out that add great quality depth are Iuri Medeiros and Wallyson Mallmann.

Wallyson Mallmann has been doing great at Nice in France. He's a really great center midfielder and Nice has been playing a system similar to Sporting and Wallyson has been playing in the same position as Adrien, which is a key position. So we can have even more quality in midfield with him too. Make no mistake Wallyson Mallmann is a top top center midfielder. He has that same great skill and quality and importantly that bold confidence too! He's stands out on the pitch and commands the game.

These two are definitely gonna big players for Sporting next season.

Maybe on the wing we will have a little bit overa*****nce of quality, and we'll have to see who stays or who is loaned out or sold. To me what I think can help the situation is if one of them convert to a different position. Anyway we'll have to see what happens, but having quality depth is a good thing.

Another player I'm looking forward to is if the transfer is confirmed is Jacinto Dala "Gelson" from 1º de Agosto in Angola. I'm really excited about him, he looks like a great young striker. He's got a lot of potential and with the help of Sporting he can blossom into a really great striker. One thing I have wanted Sporting to do more is produce more strikers. We have been producing players all over the field, but in the striker position we have not kept up that same track record. Betinho was a hope couple years ago and he's completely quieted down now. Jacinto Dala "Gelson" can be a great striker and I hope Sporting really signs him and develops him even more. I know he's an Angolan national but he's still only 19 so maybe he can change nationality and represent Portugal eventually. I'm thinking/dreaming way ahead. But anyway, my point is with Iuri Medeiros, Wallyson Mallmann, and hopefully Jacinto Dala Gelson these are three players who will bring great quality and a lot of depth to Sporting for the next season and future.

Anyway gotta stay focused on this season now and keep up the great work and continue charging forward! Forca Sporting!