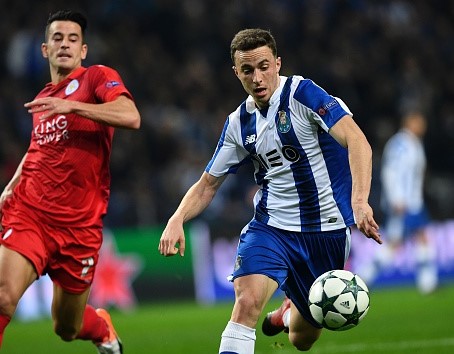 Often overshadowed by his strike partner and Portugal centre-forward André Silva, the progress made by Diogo Jota has slipped somewhat under the radar this season.

Blessed with a unique combination of passing instincts and goalscoring prowess, the 20-year-old has electrified the Dragões faithful with his impressive performances, which includes scoring a hat-trick in his first league start for Porto against Nacional in October.

Jota had already broken several scoring records since making his senior debut with Paços de Ferreira just over two years ago. And many believe this is just the beginning.

PortuGOAL takes a closer look at the supremely-talented Diogo Jota.

Jota began playing football with Gondomar, a small club in the Porto area. It did not take him long to make an impression. He moved up the ranks very quickly at the club, often thriving against players older than him.

His manager at U17 level Ruben Carvalho recalls the moment when he realised Jota was a special talent. “There was one weekend where we played Candal twice,” Carvalho told SAPO Desporto in October. “On the Saturday, Diogo started the match and scored three goals for us. The next day, he came on as a second-half substitute and scored another two.”

“In a little more than 100 minutes of action, he scored five goals against the same goalkeeper. On the Sunday, he played as a striker, but on Saturday he had played as a midfielder and still scored goals.”

In 2013, he moved to Paços de Ferreira, a club that has acquired a reputation for developing young players. Jota made an immediate impact on his professional debut, a Portuguese Cup third-round match against lower-division side Atlético SC Reguengos in October 2014, scoring a goal and adding an assist in a 4-0 victory.

In February 2015, he made his league debut for the club as a late substitute in a 2-2 draw against Vitória de Guimarães. And Jota scored his first league goal against Académica in May of the same year, adding a second in a 3-2 victory.

During the 2015-16 season, Jota scored 14 goals and added 10 assists in 35 matches in all competitions. He became the first player to reach 12 goals in a season at the age of 19. Among the headlines, was an impressive right-footed strike into the top corner from distance against Benfica in February 2016, and the only goal in a victory against FC Porto in April.

Despite interest from Portugal’s biggest clubs, Jota ended up moving to Spain, signing for Atletico Madrid this past summer, but joined FC Porto on a one-year loan. An ankle injury kept him out of the line-up in September but since then he has been one of Porto’s top performers. He scored a hat-trick in the first-half against Nacional on 1 October, in what was his first start for the club. He also scored against Benfica in his first Classico for Porto, in a 1-1 draw.

In December, he hit another milestone by scoring his first Champions League goal in a 5-0 rout of Leicester City. Coming just days after his 20th birthday, Jota became the youngest Portuguese player to score in the competition for FC Porto.

Jota began his professional career as an attacking midfielder or ‘number 10’, but has evolved into more of a roaming forward. This season, his coach Nuno Espírito Santo has used a fluid 4-4-2 formation, with Jota supporting another promising Portuguese youth, André Silva, up front. The two have formed a strong partnership.

In truth, Jota is a rare breed who does not fit into one specific position. He is known for his goalscoring as much as for his ability to create opportunities for his teammates. But, he has shown he could be a more traditional winger by sending in crosses and delivering a final pass. His dribbling ability and speed allow him to get past defenders.

His ability to read the game is impressive as well. Jota is particularly good at laying off a pass to a teammate before driving forward into a dangerous position to receive the ball back. This has worked to great effect with André Silva this season. Predominantly right-footed, he has also demonstrated good ability with his left. At the mid-way point of the season in Portugal, Jota has scored four goals and added another four assists in 13 league matches.

It is difficult to find any weaknesses in his game, although he is not much of a factor in aerial duels, winning just 0.6 per game. He also needs to work on his defensive contribution.

As for his future, much will depend on where he is playing in the coming years. It remains to be seen whether he stays at Porto next season. His loan deal does include an option to buy but the price may prove too high for a Porto club that is under pressure to comply with UEFA’s financial fair-play rules.

Atletico Madrid may decide to keep him in their squad or loan him out to another club. He has shown he has the ability to play for a top team, but his growth will be stunted if he spends long spells on the bench, and the uncertainty could hinder his progression.

Diogo Jota has achieved a lot in his short career thus far, but the decisions made regarding his immediate future at the end of the season could have a major bearing on his career development.