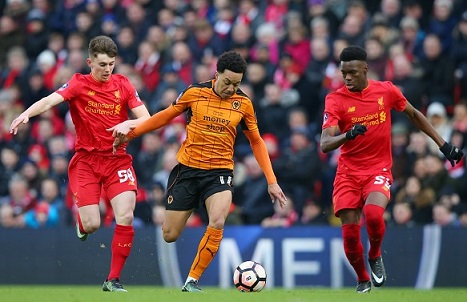 Portugal U21 international Hélder Costa has had quite a week. On Saturday, he played a crucial role as Wolverhampton Wanderers caused a shock by knocking Liverpool out of the FA Cup, providing assists for both goals in a 2-1 victory.

Yesterday the 23-year-old winger turned his loan deal at Wolves into a permanent move, the English Championship club paying Benfica €15m for his services.

PortuGOAL profiles the Angolan-born speedster who fetched the same price as the likes of fellow Seixal academy graduates Bernardo Silva and André Gomes.

The Portugal that exists today wouldn’t be as it is if it wasn’t for its former colonies. The cuisine, architecture, general day-to-day life and most recently its footballing prowess is largely due to what the former colonies have provided Europe’s most western nation.

The likes of William Carvalho, Deco, Pepe, Nelson Semedo, Gelson Martins and most recently Hélder Costa were all born in one of Portugal’s former territories.

Hélder Costa, 23 years old, has not attracted the same hype that many of Portugal’s younger talents have. Moving from Angola’s capital Luanda at the age of 11, his footballing talents certainly did not go unnoticed. Costa joined Benfica’s Seixal academy and progressed comfortably through the ranks.

Making his debut for Benfica B in Portugal’s Second Division in August 2012, the winger would go on to play 72 times, scoring 15 goals. Costa was called up to the senior team by Jorge Jesus for the first time in a Taça da Liga game against Gil Vicente, where he featured for 13 minutes.

Costa was developing well, but it was clear he needed regular first team football in a more intense league. In January 2015, he was loaned to La Liga’s Deportivo La Coruña until the end of the season but struggled to make headway at the Spanish club, making six appearances for the Galicians, all from the bench.

In July of the same year he was sent out on loan to Leonardo Jardim’s Monaco. In a team overflowing with young talent – in particular young Portuguese talent – it again proved difficult for Costa to crack the starting XI. However, he managed 3 goals in 25 appearances for the French outfit.

The potential was obvious, but Costa needed regular football to truly get into his stride. The talented winger’s next port of call was English Championship side Wolverhampton Wanderers, with another loan deal organised in the summer of 2016 for one season. Since then, Hélder Costa has gone from strength to strength.

His first few months in the English second tier proved tough as he adjusted to the extra physicality. Standing at 5 foot 10 inches, with a slender build, he was easily brushed off the ball and often shied away from challenges. But the technical prowess, raw pace, the constant desire to beat his man and his composure in front of goal have combined to see him overcome those difficulties. He has thrived at the Molineux, playing 29 times so far this season, netting 9 goals and notching 5 assists.

The Angolan born winger has frightening pace, as shown in Wolves’ win over Liverpool in the FA cup this past weekend. He has predominantly featured on the right-hand flank for Wolves thus far, which allows him to use his pace and his skill by cutting in onto his favoured left foot. Costa keeps his marker guessing as he is as comfortable driving towards the opposition net on his weaker side (excellent goal versus Nottingham Forest) as he is cutting inside and unleashing a shot with his dominant left foot (equally impressive strike versus Newcastle).

Having the ability to use both feet effortlessly sets him apart from many of his peers because it enables him to be more direct. Costa shows true desire, ambition and heart to do something with the ball every time he has it – a quality that’s perhaps overlooked in wingers nowadays as the game becomes more and more technique and tactics-orientated.

Hélder Costa was unknown to the large majority of football fans in England due to him plying his trade in the second tier. However, this past weekend Wolves travelled to Anfield hoping to take advantage of Liverpool’s poor run of form, and they did just that, largely due to Costa’s blinding performance. He fearlessly ran at the Liverpool back four, causing them no end of problems, as shown in this mind-boggling run from deep in his own half that resulted in him arguably being fouled as he unleashed his shot in the penalty area.

The turn of pace and control whilst travelling at such speed is testament to the athletic and technical abilities Costa possesses. Playing in one of the most high-profile matches of his career, not only did he wreak havoc from start to finish, but there was an end product, providing two assists against the Merseyside giants in a 2-1 victory.

With speculation that Premier League club Everton were considering a move for him, Wolves moved quickly to sign him on a permanent basis on a four-and-a-half-year deal for a fee of €15 million. If he continues to produce the calibre of performance he has displayed of late, there’s a fair chance that England’s elite will soon be knocking on the door with a handsome offer for the young winger.

What a great story. Compared to his young starlet countrymen he has gone under the radar really. So neat to see these modern wingers keeping the traditional and exciting style of the old Portuguese guard. Attack at pace, fearless in 1 on 1...

What a great story. Compared to his young starlet countrymen he has gone under the radar really. So neat to see these modern wingers keeping the traditional and exciting style of the old Portuguese guard. Attack at pace, fearless in 1 on 1 situations. Make the highlight reels every week. He missed that goal by rushing the finish but MAN what a run!

Very Gelson like in his play. Could we have another breakthrough star before the WC?