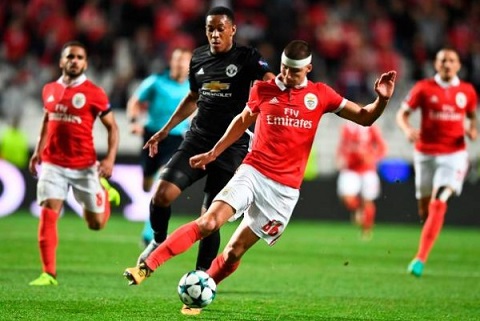 While Portugal should go into this summer’s World Cup with one of the deepest squads it has ever had, the position of centre-back remains a glaring point of concern for Fernando Santos. Age, injuries and relative loss of form will surely force the Seleção manager to look to new options.

Benfica’s Rúben Dias has made a compelling case to be considered. The 20-year-old has been one of the revelations in the Portuguese league this season. In a matter of months, he has made his senior debut, scored his first professional goal and acquitted himself well against Manchester United in the Champions League.

PortuGOAL looks at the meteoric rise of Ruben Dias.

Dias began at his local club Estrela da Amadora, originally as a forward before switching to centre-back. He points to an illuminating moment that occurred on 14 May 2005, while watching Luisão score a decisive match-winning goal against Sporting that all but clinched the league title for Benfica that season.

“When I saw Luisão score that goal, I realized that is what I wanted for my future. It really moved me,” he said. Few would have predicted that the boy celebrating his eighth birthday that day, a dozen years down the line would come to be a teammate of the Brazilian he so admired.

Growing up in Lisbon, not far from the Estádio da Luz, his father instilled his love for Benfica in his young son. In 2008, young Rúben moved to Benfica’s academy. Thus began a steady rise up the ranks that has not stopped since.

Along the way, he became a permanent member of Portugal’s youth sides, having represented his country from Under-16 to Under-21 level. He participated at the Under-17 and Under-19 European Championships.

Dias also spent two solid seasons in the Benfica B squad which plays in the country’s second tier. He also helped the youth side make the final at the 2016/17 UEFA Youth League, where they lost to RB Salzburg.

When Victor Lindelöf left for Manchester United this summer, Dias seized the opportunity, earning a spot on the senior squad. He made his debut in a league match against Boavista where he lined up with Luisão.

“I’m enormously proud to make my debut alongside the capitão,” he wrote on social media. It is perhaps ironic that his performances are keeping the Brazilian on the bench right now. Except for missing a month after having an operation to remove his appendix, Dias has been first-choice.

He scored his first professional goal in a Taça da Liga match against Vitória de Setúbal in December. Since then, he has added two league goals (both powerful headers).

Dias has a perfect set of attributes to be an excellent central defender. His positional awareness and alertness are above average, and he has good size and strength for the position. So far this season, he has demonstrated a level of confidence and poise that is rare for someone his age. Dias can also play both sides of defence, although he prefers to be on the right.

His former Benfica B-team coach Hélder Cristóvão, a former Portugal centre-back himself, pointed to his skills as a communicator as one of his strong suits. Others, including club president Luis Felipe Vieira and ex-Benfica defenders Dito and Ricardo Rocha have gone as far as to predict that he will one day captain the side.

It is a big expectation to put on the shoulders of a player who is barely half a season into his professional career, yet it is not so unreasonable considering he has captained Benfica at several levels including the B squad, in addition to wearing the captain’s armband for his country at the 2017 FIFA U20 World Cup and 2016 UEFA European U19 Championship.

“I define myself by my ambition, my will to win. I am a very communicative player, confident in my tactical and technical abilities. I want to reach the top, and ambition is very important in reaching that goal,” he recently said.

In February, the Portuguese statistical website GoalPoint reported that Dias had not allowed a single player to dribble successfully passed him in his first 13 league matches. As of 18 February, only Manchester United forward Marcus Rashford managed to successfully do so, on just the one occasion.

GoalPoint also compared Dias to Victor Lindelöf, who left Benfica for United last summer. They found that while the Swede excelled at more offensive categories like passing efficiency and actions with the ball, Dias came out on top in most defensive categories including steals, blocks, interceptions, long passes and aerial passes. The two defenders were very similar in passing completion and aerials duels.

So far this season, Dias has only received one yellow card and no reds in 15 league matches. He has averaged 1.9 aerials won, 3.3 clearances and 1.5 interceptions a match as per WhoScored.com.

He also showed his pedigree against Manchester United, starting both matches against the English giants and holding his own in two tight matches. He averaged two tackles, one block and six clearances over the two games.

While it is far too premature to predict he will be Portugal’s starting centre-back as soon as this summer’s World Cup, there is no question he has the potential to get the call-up to the Seleção soon.

Definitely deserves a call up for the upcoming friendlies.

Ruben Dias has already done more than enough this season to warrant a call-up for our upcoming friendlies. When you consider our options at center-back, it's hard to find another option (other than Pepe of course) who has had a better season than...

Ruben Dias has already done more than enough this season to warrant a call-up for our upcoming friendlies. When you consider our options at center-back, it's hard to find another option (other than Pepe of course) who has had a better season than the young Benfica defender. He has all of the tools to be a fantastic defender, and if he continues to excel week in week out, it's only a matter of time before he becomes a regular fixture on Fernando Santos' squad lists. He may not have the experience to be thrown straight into the starting 11 against Spain, but it's hard to argue that he doesn't deserve a spot on the final roster.