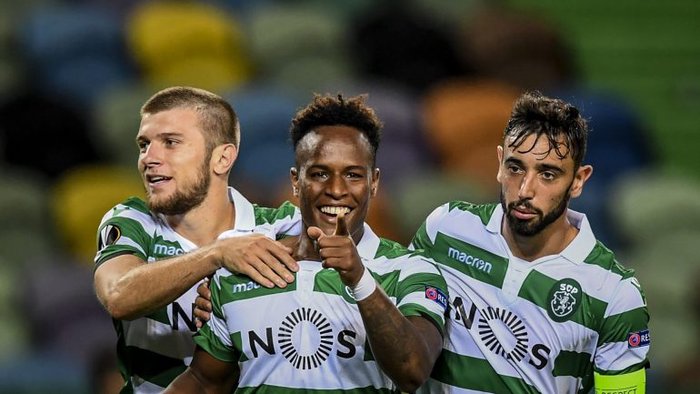 A dramatic last-gasp turnaround in Ukraine today saw Sporting turn a losing position in the 89th minute into a 2-1 victory against Vorskla Poltava to make it two Europa League wins out of two for the Lions. Late substitute Jovane Cabral scored the winner in stoppage time.

It is the latest feat in a string of key contributions made by the Cape Verde born winger, despite limited playing time. Just 20 years old, Jovane – as he is known in Portugal – has made a sensational start to his senior career and threatens to add to the Lisbon club’s rich tradition of producing top-class wingers.

Sporting hit the headlines all around the world earlier this year as a tumultuous end of season included a group of the club’s ultras breaking into the Alcochete training complex and attacking their own players, a messy presidential succession and a series of players unilaterally rescinding their contracts and walking out of the club.

One of those players was Portugal winger Gelson Martins, considered by many to be Sporting’s brightest star. Gelson, another winger born on the African island of Cape Verde, a former Portuguese colony, left for Atlético Madrid. However, the pain and anger at losing one of their brightest prospects in messy circumstances has been significantly mitigated by the fact it has opened an opportunity for Jovane Cabral, an opportunity that almost certainly would not have existed had Gelson stayed and an opportunity that the youngster has grabbed with both hands.

To exemplify the truly remarkable impact Jovane has made, here is a list of all his appearances in 2018/19 and his impressive productivity, even in games when he has been given just a few minutes:

* After a dazzling run in the final minute, Jovane is denied by an excellent save by Braga goalkeeper Tiago Sá

Crunching the above statistics, we can see that Jovane has played a total of 264 minutes (the equivalent of three full matches), contributing 3 goals, 1 assist and 2 penalties. In five out of six substitute appearances he has either scored, provided an assist or won a penalty.

Best off the bench - for now

That superb rate of having a direct impact on the game beggars the question, “why isn’t he starting?” Taking a closer look at his output gives clues to the answer and suggests Sporting coach José Peseiro is managing his development intelligently.

The winger’s strongest suits are his direct running, speed and strength, all assets that are best harnessed against tiring defences. Indeed, in both his starts, Jovane has started well only to lose his way somewhat in the course of the match, betraying the fact that he is still very raw from a tactical point of view and his decision-making needs working on. The exciting part is that both aspects can be coached and improved upon with experience, unlike his natural attributes – raw speed, strength, fearlessness and a lethal end-product – all assets you either have or you don’t.

It is again interesting to compare him to Gelson in this last respect. Gelson is a magnificent dribbler, equally fast and endowed with greater natural skills than Jovane, but Sporting and Portugal fans were often left exasperated by his wastefulness having worked himself into good scoring or crossing positions, an aspect that showed little sign of improvement despite working for three seasons under one of Portugal’s elite coaches, Jorge Jesus.

Jovane, by contrast, appears to have a finely-tuned instinct for doing exactly what has to be done in key moments of a match, thinking and executing intuitively, with little adornment. It is still early days, and the heights Jovane does or doesn’t reach will depend to a large degree on how he deals with the pressures brought by hitting stardom at such a young age.

“He’s making the front pages, he feels up in the clouds, but we talk to him every day about keeping his feet firmly on the ground,” said Sporting coach Peseiro last week. “Things are happening very fast and he’s a special case. We talk to him to make sure he doesn’t veer from the good path he is on.”

One decision Jovane will have to make sooner rather than later is which international team he will represent. Born and raised in Cape Verde, he has only been living in Portugal since 2015, and played for Cape Verde at senior level in the international friendly 2-0 victory over Luxembourg in March 2017.

However, he has not played a competitive match for the African nation, and refused to join the squad when called up by its Portuguese coach Rui Águas at the start of September, with reports in Portuguese press suggesting he has decided he would rather play for his adopted country.

In the often-tribal world of football, many Sporting fans have made little secret of their delight at Gelson Martins failing to make any impact at Atlético after turning his back on the Lisbon club. Should Jovane continue to develop and build on his spectacular start, it could turn out that Gelson unwittingly did the club a great service by leaving and helping fast-track the career of yet another exciting winger made in Alcochete.