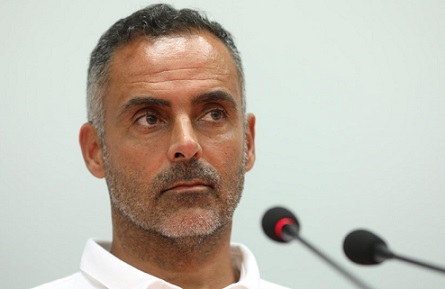 José Gomes is the most recent Portuguese manager to try his hand in English football, having signed a 2.5-year deal with Championship club Reading. Gomes left Rio Ave for British football last week, arriving at the Madejski Stadium to replace sacked boss Paul Clement with the team struggling in the second tier.

Things could hardly have got off to a more frustrating start for Gomes, with Reading having two players sent off on his debut on the bench in a 1-0 defeat at fellow regelation strugglers Millwall on Wednesday. Defender Tyler Blackett was dismissed after just eight minutes, and Leandro Bacuna followed towards the end of the match.

Despite the defeat, many felt Reading put in a spirited display and Gomes was keen to focus on the positives. "It was a very difficult match. Even if it had been 11 versus 11, it would have been a difficult match," Gomes said.

"Playing for 85 minutes with or so with ten men - and part of those 85 minutes with nine - it was a very difficult mission for my players. But they fought until the very last second, and until the last second the game was open - so I’m proud of their attitude, what they showed on the pitch.”

Indeed, Gomes' review of matchbook one of his tenure gives optimism for the future. Despite playing so much of the match a man down, Reading had 58% possession against Millwall, and Gomes says the signs are positive moving forward. "They fought, they played, they tried, they kept the ball and for long periods we controlled the game. We have to control ourselves better though, because these red cards cannot help us in our situation.

“The idea is goals”

Gomes’ focus on possession of the ball in his analysis comes as no surprise, having emphasised his philosophy upon his arrival at the club last week. The 48-year-old was clear on his unveiling that he expects his team to be creative in their play, despite the pressures of avoiding relegation.

"I love football,” he said. “Ever since we are born and when we start playing football as kids, if you ask to your friends to come and play football, the main idea is to score goals.

"Basically I like creating with the ball. And from everything I watch of our players, we have players with enough technical ability to play and follow my ideas. I have no doubt about that."

Gomes, who has coached in Greece, Hungary, Saudi Arabia and UAE, will not have to wait long to test his ideas again in the English second tier. Reading head to London to play in-form Queens Park Rangers on Saturday, with the team keen to arrest a slump that sees them sit in 23rd place in the Championship and three points adrift of safety.

The club appeared keen that their new manager would be from Portugal, having initially targeted Vitória Guimarães boss Luís Castro. That move failed to materialise when Castro opted to remain in the Liga NOS, and Gomes will be hoping to seize his opportunity to make a mark on English football.