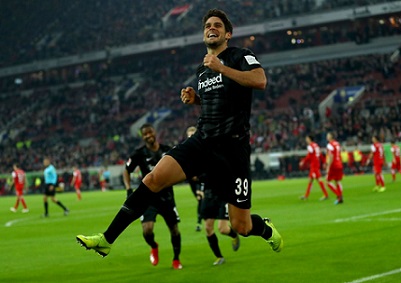 Gonçalo Paciência marked his first Bundesliga start with a goal as Frankfurt warmed up for Thursday’s Europa League showdown with Inter with a 3-0 win at Fortuna Dusseldorf on Monday night.

For the Portuguese striker it was a second goal in three appearances as Paciência finally begins to make his mark in Germany after a serious injury. Meanwhile, Flávio Paixão scored an even more crucial goal in Poland in Lechia Gdansk’s Ekstraklasa title challenge.

Paciência was handed a start by Dusseldorf boss Adi Hutter after the Portugal international had made four substitute appearances in recent weeks. The 24-year-old returned to action in mid-February having been on the sidelines since August with an ACL injury suffered after his arrival from Porto.

Frankfurt have been in impressive form of late and three second-half goals gave them the points in Dusseldorf. Paciência got the all-important opener a couple of minutes after the re-start, heading in Jonathan de Guzman’s cross at the back post. The Portuguese then laid on the second, sending substitute Sebastien Haller through to score with a neat throughball, and Haller added a third shorty after.

For Paciência, it was a second crucial goal since his comeback, having netted a late winner against Hoffenheim earlier this month. “I work hard so I’m pleased how things went today,” he said after the game. “I felt good, my confidence is growing, and the goal and the assist capped a fine day at the office.

“It’s nice to be able to help the team. If I keep scoring goals like this there’s no need to worry. I think we showed today that we have a good squad. We can bring in players without compromising our quality.”

Great away win for our team tonight, Proud to be part of this group and help in our victories.
Happy for one more goal ⚽✌ #SGE 🔴⚫⚪ #EintrachtFrankfurt pic.twitter.com/XE3wtBe77n

Frankfurt players and directors have been full of praise for their Portuguese in recent weeks, and midfielder Sebastian Rode added: “For Gonçalo personally, it was certainly a great experience today. I am very happy for him. He had a great game, controlled many balls and passed them on. The strong performance he has crowned with his goal. He is also technically very, very good.” 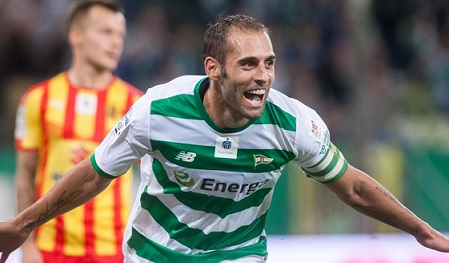 Another Portuguese forward proving his worth on Monday was Lechia Gdanzk’s veteran Flávio Paixão, who netted a penalty to earn his side a 1-1 draw against Wisla Plock as the surprise leaders come under pressure in the run-in.

Lechia, who finished 14th in the Ekstraklasa last term, have led the table for most of the season, and were 7 points clear at the start of the month. However, a 2-1 defeat to Zaglebie Lubin allowed Ricardo Sá Pinto’s Legia Warsaw to narrow the gap last weekend, and Sá Pinto’s Legia were victorious again on Sunday meaning Lechia’s lead was just a single point.

The pressure was cranked up when Lechia went 1-0 down to Wisla Plock on Monday, but Paixão was on-hand to convert a 77th-minute penalty to give his side a two-point lead at the top of the standings. The goal was Paixão’s 14th in the league so far this season, putting him second in the top goalscorer rankings, one behind Spaniard Angulo.

Next up for Lechia is a trip to bottom-placed Zaglebie Sosnowiec, where Paixão’s men will be hoping to maintain their lead over Sá Pinto’s chasing Legia.

I remember many of the regular Portistas here at Portugoal talking about this kid. Looks like he is finding his confidence. Not easy to score at any elite level but to do it at a top club like Frankfurt is impressive.

Jovic and Haller are...

I remember many of the regular Portistas here at Portugoal talking about this kid. Looks like he is finding his confidence. Not easy to score at any elite level but to do it at a top club like Frankfurt is impressive.

Jovic and Haller are having fantastic seasons and this can only help Pacienca develop. German football was always known for its grass roots movement. Glad to see Pacienca succeeding and yet another reason why Portugoal and its posters are awesome, you guys saw the potential years ago!