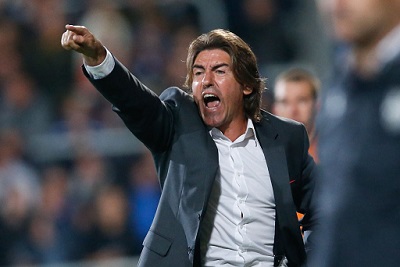 Polish champions Legia Warsaw have confirmed that Portuguese coach Ricardo Sá Pinto has been fired following their 4-0 defeat to Wisla Krakow at the weekend.

The former Sporting boss was hired last summer on a three-year contract, after the club had won the league and cup double in 2017-18, and was expected to continue a dominance over Polish football which has seen Legia win five of the last six Ekstraklasa titles.

However, Legia trail league leaders Lechia Gdansk by six points (with one game in-hand) heading into the closing stages of the season. Sá Pinto’s side had already been eliminated from the Polish Cup by second-tier outfit Rakow Czestochowa, while the heavy defeat to Wisla marked Legia’s third defeat in their last six league games.

Legia president Dariusz Mioduski had indicated that Sa Pinto would be relieved of his duties on Monday, telling reporters: “Our goal is trophies. If the path to winning them is getting away, then you have to act. This is the reason.”

Mioduski, who later commented that he believed Legia had the best players in Poland and that their performance level should be higher, stated that the club would discuss terms of Sá Pinto’s departure “like gentlemen” and move forward under the coaching of Aleksandar Vuković and Marek Saganowski.

The premature end to Sá Pinto’s time in Poland continues his trend of short tenures at clubs after he ventured into management with Sporting in 2012. Since becoming a head coach, the 46-year-old has taken nine jobs in seven years, spanning five counties, with his previous position prior to Legia held at Belgians Standard Liege last season.

Sá Pinto won the Belgian Cup with Standard, which remains the only trophy of his managerial career so far. The 45-time Portugal international reached the final of the Taça de Portugal with Sporting in 2012, where they were beaten by Académica de Coimbra at the Estádio Nacional at Jamor.

Legia have five Portuguese players on their books as they prepare to chase Lechia Gdansk at the top of the Ekstraklasa, with Cafú having been at the club since February last year, while defender Luís Rocha and midfielders André Martins, Salvador Agra and Iuri Medeiros were added to the squad during Sá Pinto’s time at the helm.

Portuguese coaches, much like the Portuguese immigrants seem to have a knack for popping up in every corner of this world and making an impact.

I like Sa Pinto, always have but perhaps he was rushed along much too quickly. He went from assistant...

Portuguese coaches, much like the Portuguese immigrants seem to have a knack for popping up in every corner of this world and making an impact.

I like Sa Pinto, always have but perhaps he was rushed along much too quickly. He went from assistant at Leiria to coaching Sporting! Insane. Perhaps that time should have been spent learning and calming the hell down! LOL

This guy wears his passion on his sleeve, something which helped him as a player but as a coach? Not sure todays players can relate to his level of doggedness. He has had moderate success but nothing compared to his large personality.

I don't like to recommend drugs to people but I think Sa Pinto needs to smoke a fat one before every game just to calm him down a bit.