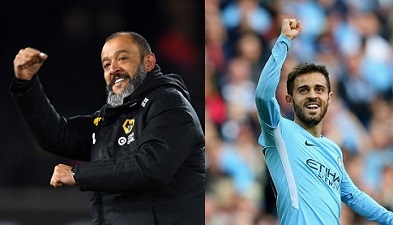 Nuno Espírito Santo and Bernardo Silva have been recognised for their outstanding seasons in England by receiving nominations for the Premier League Manager of the Year and Player of the Year awards.

Wolverhampton Wanderers boss Nuno has secured a 7th place finish for the promoted outfit, who have impressed observers this season, particularly with their form against the bigger sides. Meanwhile, Bernardo has been one of the most lauded players in a Manchester City team on the verge of defending their title with another huge points total.

Nuno takes his place on the exclusive 4-man shortlist alongside City manager Pep Guardiola, Liverpool’s Jurgen Klopp and Mauricio Pochettino of Tottenham Hotspur. Guardiola is the current holder of the award, having helped City to the league title with a record 100 points haul last season, and is the favourite to retain the prize.

Former Rio Ave, Valencia and Porto coach Nuno achieved promotion from The Championship with Wolves last season and has led the club on an impressive campaign back in the top flight. As well as a 7th place finish, Wolves’ energetic play style has drawn praise during a season in which they have recorded wins over Chelsea, Tottenham Hotspur and Manchester United in the league.

Wolves have especially impressed away from home during the season against the big boys, holding Arsenal, Chelsea and United to draws and beating Tottenham 3-1 at Wembley in a memorable victory, after which Nuno said he was “very proud” of his players for pushing for all three points.

Nuno’s cause has been aided by the help of his vast contingent of Portuguese players: goalkeeper Rui Patrício; defender Rúben Vinagre; midfielders Rúben Neves and João Moutinho; forwards Diogo Jota, Ivan Cavaleiro and Hélder Costa. Former Sporting man Moutinho is one of only three Wolves players to have taken part in all 37 league games played so far.

Who gets your vote for @BarclaysFooty Manager of the Season?

Bernardo’s second season in England has seen the former Benfica man elevate himself to one of the league’s most highly-rated players. The 24-year-old has started 30 matches, with five further substitute appearances, having made himself a vital part of Guardiola’s possession-based play with an added contribution of seven goals and seven assists.

The Seleção star is joined on a 7-man shortlist by City teammates Sergio Aguero and Raheem Sterling, as well as Liverpool trio Sadio Mane, Mohammed Salah and Virgil van Dijk and Chelsea man Eden Hazard. Egyptian Salah is the current holder of the award after his 32-goal season with Liverpool last term.

It's time to have your say!

The @EASPORTSFIFA #PL Player of the Season nominees are here!

Previous Portuguese winners of both awards will come as no surprise. Cristiano Ronaldo picked up the Player of the Year prizes in 2007 and 2008, with the latter coming in a season that saw Ronaldo hit 31 goals in just 34 appearances. José Mourinho has won Manager of the Year three times in title winning campaigns with Chelsea in 2005, 2006 and 2015.

Any chance for a profile on Domingos Quina? The kid just won young player of the year for Watford.

Hey Val, I'll have to get Sean on the job. It's a pity he's injured at the moment so won't play in the U20 World Cup, but he's certainly one to keep an eye on.

Pep Guardiola: “He was the best (this season), not just in our team. Bernardo can play...

Pep Guardiola: “He was the best (this season), not just in our team. Bernardo can play incredibly well everywhere, give me a team and he can play well there. He does everything with the ball.”

Somewhere in Southern Ontario, the man known only as -Z- venomously heaves his mug of beer against the wall whilst screaming, “MEDIOCRE!!”

Call me when Bernardo has a more than 4/10 performance for the national team.
I’m still waiting after all of these chances he gets.

He is not fit to lace Bruno Fernandes’ boots. The only persons who hype him include Guardiola and Benfica...

Call me when Bernardo has a more than 4/10 performance for the national team.
I’m still waiting after all of these chances he gets.

He is not fit to lace Bruno Fernandes’ boots. The only persons who hype him include Guardiola and Benfica fans. Even most English football pundits don’t even rate Bernardo Silva.

I will make it easier for you. I live in the City of Toronto, Ontario.

-Z- loses his argument every time as soon as he brings up Sporting or one of its former players. Sporting is Braga with the french fries and coleslaw.