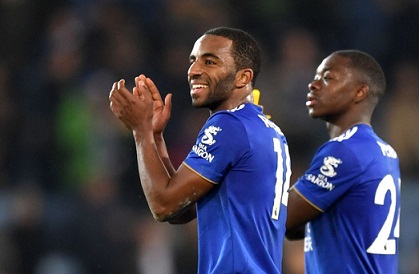 Having joined the Premier League outfit from FC Porto for €25m last summer, Ricardo has enjoyed an outstanding debut campaign at the Walkers Stadium and as such was recognised with the prizes issued by the fans and his fellow teammates.

"It’s always good to get rewarded for your performance over the year and this is my first year, so it’s even better,” Ricardo told the club’s tv channel at the awards night. “I want to thank all the players, staff and supporters too.

"Coming to one of the most difficult championships in Europe or even in the world, you never know what to expect. There’s a lot of players that come here and have some difficulty in the beginning, I know I was prepared for that too, but it’s been better than I expected!"

The Lisbon native had no difficulties adapting to a new league, a new country and two new coaches with many believing the potential of Ricardo and a handful of other top performers leaves Leicester in a good position to make a serious tilt for a top-six finish next season. Gamers wishing to wager on the Foxes could do worse than checking in at BetNumbers to see what’s on offer.

Ricardo has started 34 of Leicester’s 37 league games this season, with most of his appearances coming at right-back. However, Leicester’s boss for the first half of the season, Claude Puel, also deployed the 25-year-old in various attacking roles. Pereira’s form seamlessly continued in a more consistent right-back role under new coach Brendan Rodgers and the Seleção star has contributed two goals and seven assists to his team’s cause.

The former Vitória de Guimarães man has also picked his moments to find the net this season, with his debut goal for Leicester coming on his 25th birthday in October at home to Everton and the second proving a memorable winner against champions elect Manchester City just after Christmas.

Leicester are in 9th place in the Premier League and could finish as high as 8th ahead of the final day, on which they entertain Chelsea at home with a 2-point deficit. Marco Silva’s Everton are current occupants of 8th place and they head to Wembley to play Tottenham Hotspur on Sunday’s final round of fixtures.

Gomax
This comment was minimized by the moderator on the site

As a beginner, it's really a good start for him. Hope to see you with more awards and best performance too. But nothing comes easy...you gotta pay the price of hard work. Cheers!

Yet, still hasn't got a call up from Santos since the World Cup, SMH.

I dont think this has anything to do with ability but Joao Cancelo, Cedric Soares and Nelson Semedo all very good as well. No use taking all 4 of them. Tough choice for Santos.

—-Z—
This comment was minimized by the moderator on the site

Some people, like the mediocre Ricardo Pereira (who has a Liga Nos trophy, Taca de Portugal, and these individual awards), can never measure up to true stars like Z for Zendetta.