From Monaco to Manchester, Bernardo conquers all before him 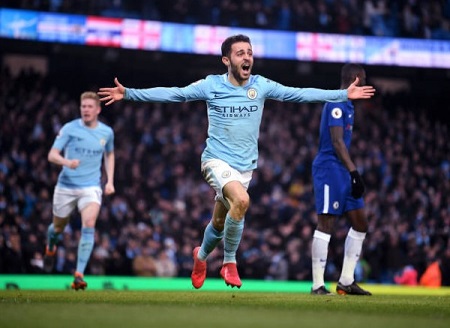 The night of Tuesday 21st February 2017 might reasonably be bookmarked as the occasion Manchester City fans first became aware of what the future might hold for them.

It was the Etihad first leg of the Champions League round of 16 match with Monaco, the surprise package of that season’s edition. On an indescribably unstable night, Monaco led twice at 2-1 and 3-2, before succumbing 5-3 to a City side powered forward by a combination of Sergio Aguero’s unstoppable attacking prowess and the crowd’s semi-delirious fervour.

L’Equipe led with a front page decorated with all the goal action and a single large 8 in the middle, under the headline “Le Grand 8”.

It had been a night of extravagant skills and outrageous goals. Monaco had even managed to miss a penalty in amongst the carnage.

A young Kylian Mbappe had scored and an ageing Radamel Falcao spent long periods of a frenetic match reminding all that his barren spells at Stamford Bridge and Old Trafford had not been the real him at all with a breathless display of his own up front. But, there was something else going on at the heart of the action that would pave the way to the eventual dawn of another emerging hero in sky blue.

Ironically on this occasion, however, the man in question was wearing the unmistakeable red and white halves of the visitors. Tucked in on the right of midfield, sometimes hugging the flank, often veering inside to cause havoc in the central areas, but always carrying the trouble with him, Bernardo Silva orchestrated all that was dangerous in Monaco’s stunningly fluid attacking game. For a time in the first half the wiry little Benfica youth product seemed utterly unplayable, weaving in and out at will and finding his team mates with laser precision. He was a constant, ever-present nuisance that Guardiola’s thoroughbreds just could not get to grips with.

That he tired in the onslaught and left centre stage to his City counterpart and namesake David Silva would also be telling. When he finally shipped up in Manchester that summer, it was widely expected to be as an eventual successor to the little Spaniard. The two midfielders share much more than the mesmeric close control, ability to thread passes others dare not dream about and a safe hand in the Guardiola possession game. They can both take a tackle, they are significantly tougher than their frail frames suggest and they put the kilometres on the clock playing another vital part of the Guardiola ideology, the energetic high press and quick recovery after loss of possession.

Bernardo won the league with Monaco and followed that up with the Premier League title in Guardiola’s record-breaking season of 2017-18. Now he has done it again, as a central figure and – to many people – as City’s and perhaps the Premier League’s best player this season. He has emerged in double quick time as one of the main players in a stellar squad, which may yet go down as unprecedented quadruple winners in England this season. To stand alongside the likes of Silva, Aguero, Kevin de Bruyne and Raheem Sterling and still come out smelling of roses is quite a feat.

It was perhaps the absence of the Belgian playmaker that thrust Bernardo into this season’s spotlight. What could have been a savage blow to City’s title hopes merely opened up the possibility of using the Portuguese in a much more prominent and frequent role.

Gluing it all together

City have had to ride several key injuries this season. Bernardo’s erstwhile Monaco team-mate Benjamin Mendy has also been out for most of the season and long-term injuries to Fernandinho, Fabian Delph, De Bruyne  and Vincent Kompany could have dented that surge for trophies. The emergence of the astonishingly mature talent Oleksandr Zinchenko as a long-term emergency left back was remarkable, as was the sterling work of Ilkay Gundogan, an energetic and classy replacement for the injured Fernandinho, but the one player who has glued everything together in the absence of De Bruyne has been Bernardo Silva.

Genial and easy-going, he has been Guardiola’s trump card, team mates’ favourite target for pranks and the Etihad crowd’s latest idol. His willingness to step into wide roles or central positions, his inevitable clocking of more kilometres than anyone else on the park, his bulging-eyed gleeful goal celebrations have all set him apart as a real gem in this squad of twinkling jewels. Unbowed by the pressure of the big occasion, it was Bernardo who swept the ball past David de Gea in the tension-packed Manchester derby at Old Trafford, a game City needed to win on the back of a draining Champions League departure against Tottenham.

As a player and as a character the youth prospect, who left his native Lisbon so early to find fame and fortune in Monaco, has grown into a man, the man for Manchester City and Portugal, a player who the rest can rely on in a tight spot, a player who will deliver week after week, put in the hard yards and provide the silky passes and sureness of touch that gives the teams he plays for an immediate broad-based platform to victory.

You could perhaps say that Bernardo Silva has grown up in Manchester, a city of grit and endeavour in stark contrast to the parasol pines and cocktail decanters of Monte Carlo. He has brought with him the extravagant skills that shone on the French Riviera and planted them in the heartland of Manchester, the city of the Industrial Revolution. There can be no more apt a metaphor than that for this industrious little genius with the football world at his feet.

What exactly has he conquered?
Overrated.
Hasn’t had a good game for Portugal yet.

well he earned DeBrune's spot, scored a lot and assisted a lot for his position, lasted the whole season strong, was really the only shinning star in the Portugal vs Uruguay match