Where next for Pedro Rebocho? Clubs circle round Guingamp’s Portuguese gem 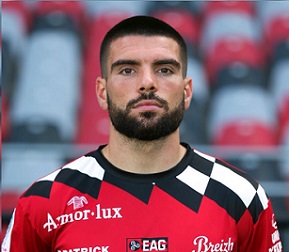 Pedro Rebocho appears to be one of the most coveted players on the French transfer market this summer, as the Portuguese defender looks to leave relegated Guingamp.

André Villas-Boas’ Marseille are among the wide range of clubs being linked to former Benfica academy prospect Rebocho, with English sides such as Watford and Leicester City also suggested as possible suitors for a bargain deal to sign the €5m full-back.

Guingamp endured a miserable campaign in Ligue 1, winning just five league games and suffering relegation two matches before the end of the season. However, Rebocho was a revelation for the Brittany-based club as his attacking contributions from left-back brought a remarkable 12 assists in all competitions during his second season at the Stade de Roudourou.

Rebocho’s eight assists in Ligue 1 put him in the top ten providers in the league, with only six players registering a higher figure. The 24-year-old’s creative output also saw him second only to Strasbourg’s Kenny Lala in chances created by a defender, as Rebocho recorded 51 openings created for teammates. As a result, Rebocho was named on the list of nominees for a place in the Ligue 1 Team of the Season for 2018/19.

Links with Marseille and Villas-Boas, with whom Rebocho shares his agent, have been dismissed by Portuguese paper O Jogo, but French reports continue push the player towards the former Porto coach. Lyon, Lille and Saint-Etienne are all thought to be involved in the race, as well as Leicester and Watford in England and Scottish giants Rangers who are long-term followers.

Rebocho is tied to Guingamp for another three years, having signed a five-year contract upon his arrival from Taça da Liga winners Moreirense in 2017. However, new coach Patrice Lair has already stated that it will be “hard to keep” Rebocho, who should be allowed to leave if the much-capped Portugal youth international’s €5m valuation is met in the coming weeks.