Cristiano Ronaldo talks Messi differences and insists: “I don’t need money, I want to earn my legacy in football” 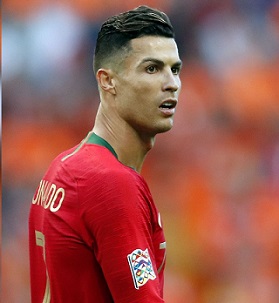 Juventus forward Cristiano Ronaldo says his sole motivation in football is to add to his legacy, after 17 years at the top level of the sport and no sign of let-up from the Portugal captain.

Ronaldo also discussed the comparisons often made between him and Barcelona and Argentina idol Lionel Messi, and spoke glowingly about Real Madrid manager Zinedine Zidane, having worked with the Frenchman for three seasons in the Spanish capital, detailing the personal qualities that bonded the pair.

The Seleção star was speaking to DAZN ahead of the new season, marking Ronaldo’s 18th at professional level, during which time he has represented Sporting, Manchester United, Real Madrid and now Juventus in a glittering career that has also led to international success with his country at Euro 2016.

As one of the highest-earning sportsmen in the world, Ronaldo’s accumulated wealth is well-documented, but the 34-year-old says financial motivation has disappeared as he focuses on his long-term reputation in football. “I work to win collective trophies first, because I know that after that they will give me individual trophies,” Ronaldo said.

“It’s my job, my daily life. I wake up every day with the mindset to achieve something, not just to make money. I do not need money any more, thank God. What I want is to earn my legacy in football. Earn it more and more.”

Discussions involving Ronaldo’s legacy in football too often lead to comparisons with Lionel Messi, and the Portuguese was inevitably asked about the Barcelona and Argentina star. “The difference with Messi is that I played for several clubs and won the Champions League with different clubs,” said Ronaldo.

“Messi is an excellent player who will be remembered not just for his Ballon d’Or wins, but also for having improved – like me – year after year.” 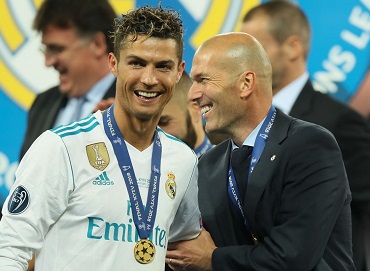 Zidane "in my heart"

Three of Ronaldo’s Champions League medals came under the management of Zinedine Zidane at Real Madrid, where the pair helped the Spanish side to a treble of back-to-back European crowns between 2016-2018. Ronaldo speaks highly of the French manager, who joined him in leaving Madrid last summer, only to return for the closing stages of the season.

"The confidence a player needs isn't just up to him, but the people around him, the other players and the coach. You should feel like a crucial part of the group and Zidane made me feel special,” Ronaldo said.

“He helped me. I already had great respect for him, but after being my coach I became an even greater fan of Zidane. The way he is, the way he speaks, the way he coaches the team and the way he treated me.

'Zidane always said to me ‘Cris, relax. In this game you can relax because it is you who will make a difference in this team’. That gave me a lot of confidence. He has always been very honest with me and so I keep my relationship with him in my heart. I am still a fan of him because, besides being a great coach, he is a great person.”