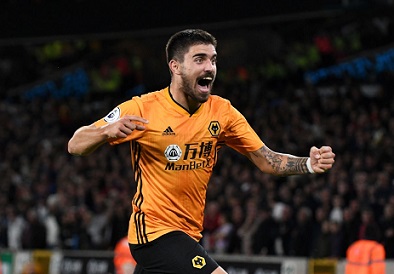 Wolverhampton Wanderers and Manchester United played out a closely-fought 1-1 draw at Molineux on Monday evening, and it was the contribution of the home side’s Portuguese which dominated the game.

Nuno went with four of his Portuguese contingent in his starting line-up, with Patricio, Moutinho and Neves joined in the side by Diogo Jota, while Rúben Vinagre and Pedro Neto took their places on the bench. Meanwhile for United, Diogo Dalot was again not in the match squad for the game.

United had the better of the first half and their greater proactivity against a defensive Wolves yielded the only goal of the opening 45 minutes when Martial’s strong left-footed drive finished a slick move. The visitors ended the half pressing for a second and Nuno responded at the break by introducing pacey Spanish winger Adama Traore in place of wing-back Matt Doherty.

The change gave Wolves more of a threat instantly from the re-start and the hosts equalised ten minutes into the second period. Moutinho’s outstanding pass found Neves on the edge of the area and the former Porto man set himself before dispatching an unstoppable shot into the top corner to send the home fans into raptures. A subsequent VAR check to decide for offside on the moment Moutinho received possession frustrated the crowd but the goal was given.

United soon regained the dominance of the first half as Nuno’s team, perhaps with an eye on Thursday’s trip to Torino, looked to sit back and hold onto the draw. The plan came under severe threat midway through the second period when Pogba won a penalty, but the Frenchman’s well struck spot-kick was superbly saved by Patrício.

Nuno sent on Pedro Neto for the final five minutes as the game played out to a 1-1 draw, with the Portuguese boss emphasising after the final whistle his pride in Wolves’ performance. “I am proud of all the performance because this is what matters in this moment of the competition,” he said. 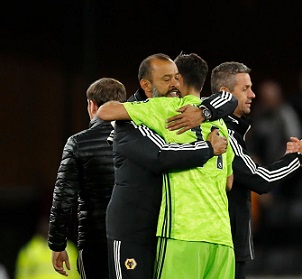 “It was a game of emotion, this is what Molineux enjoys and we have to thank the fans so much because the atmosphere when we get control of the game and create chances, they really push us, amazing.

“Let’s do what we do, play with the energy we should play with, embrace the challenge and fight for the game. The boys fought for every single ball, it was so good, I’m very proud of them.

“It was a very good game of football. The second half, the boys were fantastic. They were dynamic, had good tempo, intensity, pressure, everything was very good.

“The game changed, the pressure was us, the recovery, the chances but we were playing against such a good team, so you have to keep in shape and stay organised.

“Neves’ goal? I was hoping, not expecting, because he’s fantastic. He has this technique of kicking the ball, he’s done it sometimes before, but he has to do it over and over against because this is what counts.”

Finally, as a recent critic of VAR, Nuno was asked whether the delay in confirming the Neves goal frustrated him. “I didn’t want to lose that moment. I don’t know how they’re going to solve it, I gave my opinion to it, but it’s the emotion.

“You celebrate a goal and it’s such a beautiful moment, so when you are stood in silence waiting for it, don’t take that away from the people, because it’s the most important moment in football.”

"Why are you so obsessed with football?"