BRAZIL: Jorge Jesus unimpressed as Sao Paulo end Flamengo run: “It felt like I was in Saudi Arabia” 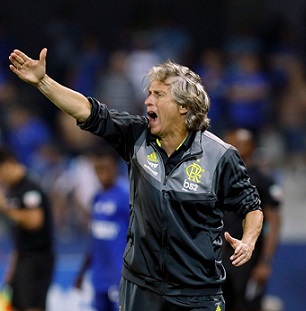 Flamengo’s winning streak in the Campeonato Brasileiro Série A came to an end on Saturday evening as the leaders were held to a goalless draw by Sao Paulo at the Maracanã.

Jorge Jesus, who had led his side to a club record seven consecutive league victories, was far from impressed with the approach from the visitors, who had former Barcelona veteran Dani Alves in their line-up. Despite the setback, the smart money at bets-promo-code.co.uk is on the team from Rio de Janeiro lifting the title at the end of the season.

“Sao Paulo has great players and they don't have to do so many things, and the referee was complicit,” said the Portuguese. “Stopping the game with muscle cramps? I felt like I was in Saudi Arabia. There the players would throw themselves to the ground like this.

“If it's an injury, that's fine. But the cramps were to stop the game. Sao Paulo barely approached our goal to create chances. They played not to lose.”

Next up for Jesus and Flamengo is the much-anticipated Copa Libertadores showdown with Gremio in midweek. The sides meet in Porto Alegre in the semi-finals first leg on Wednesday and the game has been stoked by recent remarks made by Gremio coach Renato Gaucho about his counterpart’s impact on Brazilian football.

“Jorge Jesus has won 2-3 titles in Portugal then left for Arabia. He's never coached a big club or achieved anything abroad and he's 65. When he keeps winning, we'll know he's great,” Gaucho said earlier this month, more recently adding “I had never heard of him” while conceding that Jesus has done a "wonderful job" so far at Flamengo.

Jesus will be hoping his team do his talking on Wednesday. “This draw has no impact,” said the former Benfica coach. “It would be just as difficult a match [against Gremio] had we won. We knew we wouldn’t win every game. Most importantly we didn’t lose.”