BRAZIL: “We were better in every way” Jesus praises players, takes aim at officials, as Flamengo held by Gremio in Copa Libertadores 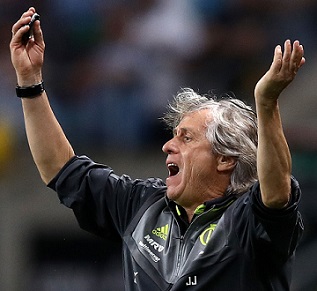 The all-Brazilian semi-final of the Copa Libertadores played out its first leg on Wednesday evening, with Gremio and Flamengo producing an enthralling encounter which ended in a 1-1 draw in Porto Alegre.

Although the draw represents a decent result for Jorge Jesus’ side, there was a strong sense that Flamengo could have come away with more having asserted themselves superbly against one of the competition’s recent powerhouses.

Flamengo arrived in Rio Grande do Sul carrying a dreadful record in the fixture. Since 1970, Fla had registered just four victories from 42 visits to Gremio, with their last win in 2004 coming just days after Jesus had secured survival in the Portuguese league with Vitória Guimarães.

If some suspected the record to play on the Flamengo players’ minds, such ideas were quickly dispelled by the visitors’ start to the match. Jesus’ men were excellent, dominating territory and the ball and pushing Gremio – one of Brazil’s best passing sides – back and smothering the play inside the opponents' third for much of the first half an hour.

Twice during the first thirty minutes Flamengo had the ball in the back of the net, but VAR denied Everton Ribeiro on 20 mins due to a push from Gabriel Barbosa in the build-up, before Gabriel himself saw his goal flagged offside on 27 minutes. Both were tight calls, particularly the offside in which the Flamengo striker marginally advanced past the Gremio defence.

Although Flamengo dominated the ball, both sides attacked with great emphasis, creating direct moves with precision to make for a wonderful match and a great advert for South American and Brazilian football. The whistle blew for half time with few able to deny Gremio’s fortune at going into the break level.

The second half was more even, with Flamengo losing a little of the relentless compact pressing efficiency and Gremio finding more space to make passes. However, a more stretched encounter proved the setting for Jesus’ men to open the scoring midway through the half when Bruno Henrique rounded off a sharp attack with a back post header to make it 1-0.

That goal stood, but Flamengo were again to be denied by the offside flag ten minutes later when Gabriel once more found himself ahead of the Gremio defence by the slightest fraction when rushing in to convert a cross from close range. All three decisions against Flamengo were tight, but many agreed perhaps the officials just about came down on the right side of all of them.

Flamengo came within minutes of the end of normal time with their lead intact, before an equaliser which drew some controversy. Filipe Luis fell to the ground injured and with Flamengo having initially played on, they were at the mercy of their opponents when Gremio retrieved possession and took advantage of the numerical superiority to score through Pepe. Naturally, VAR had its say on the legitimacy of the goal before the home crowd could fully savour the late leveller.

Jesus rallies against officiating: “We should leave with a win”

The draw leaves the tie in the balance, but Jesus was far from satisfied at the final whistle, with more than one complaint from the veteran Portuguese. "We should leave here with a win because Flamengo was better on the pitch in every way," he said. “If football were figure skating, we would leave here with a thrashing.

“But what counts is the result and the result was 1-1. Congratulations to the Flamengo players on an extraordinary performance, we had more than 60% possession of the ball, that doesn’t mean everything, but it says something about our control of the game.”

Inevitably the conversation turned to officiating, and Jesus was in typically spiky mood about how his team fared from the refereeing decisions. “We scored four goals, but only one. I have a lot of doubts ... in fact, I have no doubt about Gabigol's first goal. I don't know how it was ruled out. Was the referee against Flamengo? No doubt.

"We conceded the goal of a tie with Filipe Luís on the ground. Gremio did not put the ball away. Well done to them. We will also do that in the future against our opponents. 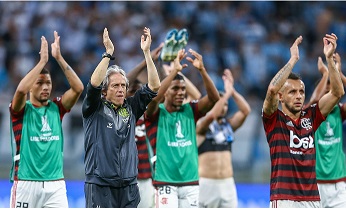 "The home factor [in the second leg] is not decisive, but it is important. Even more so in Maracanã, with a mass of supporters pushing the team. We hope we will be able to achieve the goal, which is to be [in the final] in Chile. The result, theoretically, is better for Flamengo.”

One backdrop to the match was a string of comments in the build-up from Gremio coach Renato Gaucho, who spoke of his opposite number from Portugal having “only won 3-4 titles in Portugal” and “never managed a great European team.” However, Gaucho admitted the difference between the sides during the match, albeit perhaps attempting to plant doubts in the Flamengo players’ minds.

"Flamengo was much better than us in the first half. Gremio didn't see the ball, we just watched Flamengo play,” Gaucho conceded. “The goals were all correctly ruled out, VAR is here for that.

"Flamengo missed a great opportunity to leave here with a better result. We were without four major players. Not that I'm complaining, but it is difficult.

“We came back better in the second half and at our best moment of the match, Flamengo scored. But we kept fighting and we got a draw. As it turned out, 1-1 was good. But I just want to remember that the game is not over yet. There are still 90 minutes left.”

If the return in Rio de Janeiro three weeks from now is anything like as engrossing as the opener, it will be unmissable.