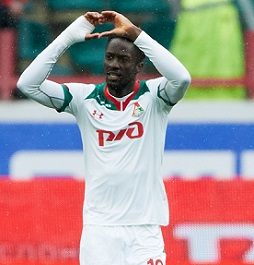 Portuguese international Eder scored for Lokomotiv Moscow in their 2-1 win over Arsenal Tula on Sunday to help his team stay top of the Russian Premier League.

The experienced striker headed home in the first half to score his 4th goal of the season, meaning Eder has already beaten his goal tally in all competitions from last season with Lokomotiv.

Eder got the opener against Arsenal in the Russian capital with less than nine minutes on the clock, heading in Fyodor Smolov’s cross to put the hosts ahead. Evans Kangwa levelled for Arsenal almost immediately, but Aleksey Miranchuk’s penalty on the stroke of halt time, which he won after a pass from Eder, proved to be the winner.

For Lokomotiv, who had João Mario in midfield for the full ninety minutes, the victory represented a fourth league win in a row. Lokomotiv remain leaders of the table, although all four sides at the top of the Premier League have 26 points from 12 matches.

Among the sides fighting it out at the high end of the league are Krasnodar, who beat Spartak Moscow 2-1 with recent signing Manuel Fernandes watching the match from the bench as the veteran midfielder works towards reaching full fitness with his new club.