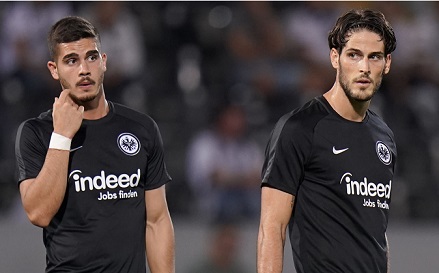 André Silva will join up with the Portugal squad in fine goalscoring form after getting his third goal in as many Bundesliga games for Frankfurt on Sunday, but the former Porto man was denied a late winner by Werder Bremen in a 2-2 draw.

Silva was paired in attack with compatriot Gonçalo Paciência as Frankfurt hosted Bremen in the final match of round seven in Germany, and both players could have notched numerous goals and assists on an afternoon which saw the duo praised by Eintracht boss Adi Hutter.

In a lively encounter, Paciência may have given the home side the lead after 15 minutes but he was unable to convert Silva’s well-placed cross. Shortly after, Paciência set up Japanese midfielder Daichi Kamada who struck the bar, but it was to be Bremen who took a half time lead through Davy Klaassen.

Frankfurt began the second half with real impetus and Paciência’s superb header drew an excellent stop from Bremen goalkeeper Jiri Pavlenka within a minute of the re-start. The ex-Porto striker’s aerial prowess was again in evidence soon after as his flick-on set up Kamada who somehow failed to convert from close range.

The equaliser was coming and sure enough Frankfurt midfielder Sebastian Rode levelled things up with a superb drive on 54 minutes to put the hosts in the ascendency. Pressure in searching for a winner paid off in the 88th minute when another Paciência header was parried into the path of Silva who grabbed a poacher’s goal to make it three in three for him in the Bundesliga.

Silva’s goal looked set to be the winner but a poorly-timed challenge from vastly-experienced Frankfurt defender Makoto Hasebe gifted Bremen a penalty on 90 minutes. Milot Rachica converted to earn the visitors a point and ensure Frankfurt occupy 9th place in the table heading into the internationals.

“Bas Dost was missing today but Gonçalo Paciência and André Silva did a great job,” said Frankfurt coach Adi Hutter after the game. “We deserved the win. Big compliment to my team, which was also physically strong three days after the game in Portugal. It was the strongest game for me this season.”