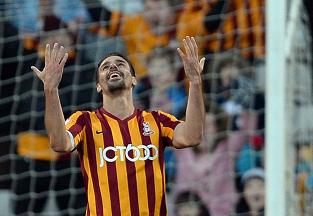 It's FA Cup 4th-round day in England and at Stamford Bridge two Portuguese will be facing each other a decade after they were together at Chelsea.

Bradford City travel to Mourinho's EPL table toppers with 29-year-old Filipe Morais striving to get one over his former coach.

In an exclusive interview, in association with Portuguese website zerozero.pt, Morais talks about Mourinho's explosive impact when he strode into Chelsea back in 2004 and the midfielder admits he would be open to a move to a Portuguese club.

I remember it vividly. Obviously it was Claudio Ranieri before that and Abramovich had just come in. When Mr. Mourinho came it was definitely a big, big change. He's on point with everything, he's so astute. Every little detail – training is never over an hour and a half, the same as a match. Literally from the first second to the last second, balls are set out in very specific ways and areas and you move from drill to drill at specific times.

No-one at Chelsea had ever experienced anything like that, and I'm talking first team players as well, so it was a massive shock for everyone in a good way. It was just like, wow, this is the real thing, he knows his stuff. Everyone was just excited and taking every little thing he said in. His team talks and man-management are unbelievable – he engages the players so well and the players really took to it. He makes really good technical players work harder than normal, that's why he is so successful

Ronaldo moved to Man Utd when you were at Chelsea. Has the player he's become surprised you?

I had a few (Portugal) training camps at Under-17 level with him. He had all the skills, but I never thought he'd reach the level that he is because he was so slim and quite lightweight. I never thought he'd end up such a tall, powerful man. I didn't expect it, but ability-wise I did think, wow, he's unbelievable. The athleticism he's got has kicked him on even more and that's why I think he's at the level he is.

Would you consider moving to Portugal and playing here?

100%. I was very close to going to Portugal the last two summers. I was very close. There were a few teams: one in Lisbon, one up north and one in-between – good clubs, but my family is here and I have a son who doesn't speak Portuguese, so adapting might be difficult. Maybe in a year or two, you never know. Who wouldn't want to play there, the sun, the lovely weather, the food? I'd love to go back, but it's about finding the right deal at the right time.

I also don't want to go back to play somewhere where there's nothing to fight for. I'm playing here in League One, but English football is so competitive and a good standard. There are some big, big clubs and we are going for promotion as well. In Portugal, it's the fan-base – in League One we get 14-15,000 every week, guaranteed, and (in Portugal) you're not going to get that at medium level clubs – I'm not even sure Braga get that many.

Stephen Gillett was asking the questions. Our thanks to zerozero.pt.