GERMANY: “We showed we are a big team” – Paciência scores as Frankfurt smash Bayern; Guerreiro on target in Dortmund victory 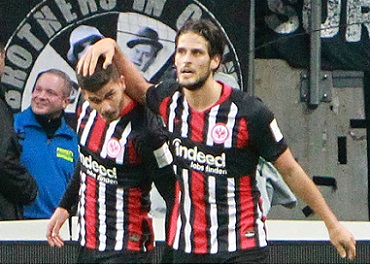 Gonçalo Paciência scored the crowning goal as Eintracht Frankfurt secured one of the results of the season in Germany’s Bundesliga, beating champions Bayern Munich 5-1 at Commerzbank Arena on Saturday afternoon.

The result allowed title challengers Borussia Dortmund to move above Bayern and into second place in the table, with Portugal left-back Raphaël Guerreiro also on the scoresheet as his side beat Wolfsburg 3-0 at home.

Ex-Porto striker Paciência was selected in attack for Frankfurt by coach Adi Hutter and played the full ninety minutes on a memorable day for the home side. The match took a decisive swing in Frankfurt’s favour when Bayern defender Jerome Boateng was sent off with less than ten minutes played, and the hosts punished their opponents to lead 4-1 before Paciência rounded off the scoring late on.

Substitute Andre Silva was the provider, laying the ball to Paciência for the 25-year-old to convert from close range with five minutes left to play. The goal was Paciência’s 6th in the Bundesliga this term, which is double his tally from last season during which the striker suffered an anterior cruciate ligament injury in September.

Speaking about the victory over Bayern, Paciência said: “It’s only possible because we work a lot; we fight a lot. We demonstrated today that we are a big team. Against the best team in Germany we showed today that at home Eintracht can do great things and can write a beautiful story. So it was an amazing night for us, amazing night for the fans.” 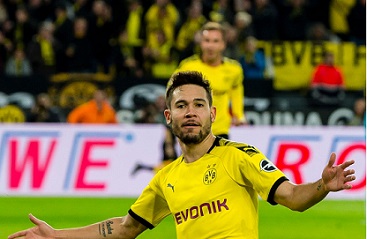 Elsewhere in Germany’s top flight, Raphaël Guerreiro found the net with a trademark precise left-footed finish to help Dortmund to victory over Wolfsburg. Dortmund scored all three goals in the second half, with Guerreiro’s strike doubling his team’s advantage when he received the ball from Thorgan Hazard and connected with a sweet finish into the far corner on his favoured left side.

Borussia Monchengladbach lead the way after ten rounds of action in the Bundesliga, with Dortmund up into second with a 3-point deficit. RB Leipzig in 3rd and Bayern in 4th are both a further point back on Guerreiro’s side in what looks set to be a competitive top four this season in German football.