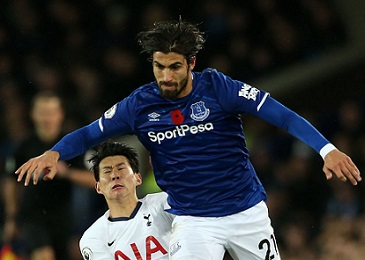 Portugal midfielder André Gomes was stretchered off with a serious injury during the latter stages of Everton’s 1-1 draw with Tottenham Hotspur on Sunday afternoon, with the incident and its impact on other participating players overshadowing events at Goodison Park.

The former Benfica man was brought down by Spurs’ Son Heung-Min, with a subsequent collision with Serge Aurier leading to severe damage to Gomes’ right leg. The reaction from surrounding players, including a visibly distraught Son who later had his yellow card quickly upgraded to a red, depicted an injury of grave nature.

Gomes received treatment on the field for over five minutes before being carried off to a warm ovation from the home crowd. The injury would appear to rule Gomes out for a significant spell and puts his participation in next summer’s European Championships in doubt, having recently made his return to the Seleção squad

“It’s been a difficult day for us and the main thing is Andre,” said Everton boss Marco Silva following the match. “It’s a tough moment for him and for us as a club, for our dressing room. As a footballer all of you know his quality, but as a professional and as a lad he’s fantastic. Everyone loves him at this football club, so we will be strong.”

Gomes’ teammate, Fabian Delph, added to those words, saying: “It’s a difficult time for everyone, he’s one of our brothers. We don’t like to see it happen to anybody, but such a good guy and good professional. It’s hard to put into words.”

While Gomes’ health is of biggest immediate concern, the late equaliser scored by Cenk Tosun in the 97th minute was crucial in not adding to Everton’s misery. The draw leaves Silva's men in 17th place and three points above the relegation zone, having won just one of their last seven Premier League games.

Andre Gomes finally finds a place where he is growing and playing well again and this shit happens.

Tackle from behind by Son put him off balance, he fell and Aurier was already committed to the challenge and it when tits up.....poor Andre. Hope...

Andre Gomes finally finds a place where he is growing and playing well again and this shit happens.

Tackle from behind by Son put him off balance, he fell and Aurier was already committed to the challenge and it when tits up.....poor Andre. Hope he gets through this.

I have to say I think the upgrade to a red was mistake. You can't just change a decision because the player got injured.

Lets hope it isn't too bad

just watched the video of his ankle getting relocated... OUCH!!!!!