BRAZIL: Flamengo back to winning ways under Jorge Jesus: “Everywhere I go we break records” 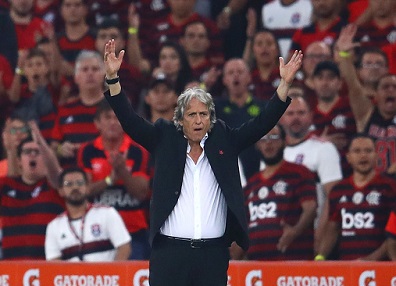 Flamengo beat Corinthians 4-1 at the Maracanã Stadium on Sunday evening to maintain their 8-point lead at the top of Brasileirão with just eight matches left to play.

Forward Bruno Henrique scored a remarkably-timed hat-trick for the Rio de Janeiro club, and former Braga, Benfica and Sporting boss Jorge Jesus was in typically swaggering form during the post-match interview when discussing his coaching impact on the team as well as Henrique’s form under his tutelage.

Much of the damage by Flamengo was done in the space of just a few minutes either side of half time. With two minutes left of normal time during the first half the match remained goalless; less than sixty seconds into the second period it was 3-0 and Henrique had scored all three of his team’s goals. A penalty – scored at the second attempt – and two masterfully controlled finished put Jesus’ men in the ascendancy.

Vitinho added the fourth midway through the second period to make it 4-1 after Mateus Vital had pulled one back for the visitors. The result was a welcome return to winning ways for Mengão, whose dropped points in a 2-2 draw with Goias last week allowed defending champions Palmeiras to cut their lead at the top from 10 to 8 points. With Palmeiras again winning this weekend, Sunday’s result maintains that advantage for Jesus’ side.

Following the final whistle, the veteran Portuguese boss was asked about the form of Henrique and his team in general as their unbeaten record stretched to 21 matches. “I didn’t come here to Brazil to invent anything,” he said. “I came here to work and translate my ideas to Flamengo. And I’m proud of my work. This was another great victory against a very strong and tactically organised opponent who had not conceded four goals in a single match. We were fluid and knew we could score at any moment.

“Bruno Henrique? He is a complete player. He has a lot of talent plus something I consider important in order to be a great player: he is humble and works for the team. This can be a rare quality for striker, who can often just want to attack. You have seen how he played before and how he has played since I came here. He did a lot to get here.”

Flamengo’s form has seen many – including Brazil legend Rivaldo – compare Jesus’ side to the club’s best-known side from the early 1980s which won the Copa Libertadores. With expectations raised by the team qualifying for the Libertadores final for the first time since, Jesus insists nothing has been achieved yet but exuded confidence in his words.

“[The ‘80s team] are an inspiration,” Jesus said. “Especially as they made history with this great club by winning. We are making history, but we have won nothing yet.

“One thing is for certain – and I say this without vanity – but everywhere I have been we broke records. Be it Benfica, Sporting…Flamengo. It has been this way.”