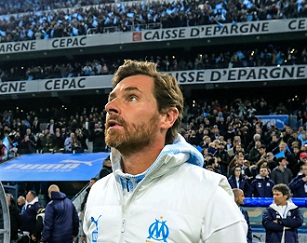 As we round up the remaining stories from the weekend across the world involving Portuguese exports, the country’s foreign-based coaching contingent made most of the other major talking points. André Villas-Boas leads the positive news, having ensured Marseille go into the international break 2nd in Ligue 1 thanks to a 2-1 victory over Lyon in France.

Elsewhere, Jorge Jesus and Flamengo took a huge step towards the Brazilian title by coming from behind to beat Bahia, while Leonardo Jardim and Marco Silva were also victorious. Less good news in Italy, however, as Juventus’ Cristiano Ronaldo’s persistent knee injury saw his involvement against Milan cut short and Paulo Fonseca suffered defeat at Parma.

Two first-half goals from Dimitri Payet were enough to see 10-man Marseille past Lyon in Sunday evening’s big game in France. Payet’s 18th-minute penalty, which was too good for Portuguese goalkeeper Anthony Lopes, and a classy finish from just inside the box five minutes before the break put Marseille on the road to victory, and André Villas-Boas’ side held out after conceding to Moussa Dembele (59’) and having defender Alvaro Gonzalez sent off on 64 minutes.

“It's a shame that we must always suffer,” said the former Porto boss, whose team now occupy second place in Ligue 1 behind Paris Saint-Germain. “We were in such control of the game at the end of the first half that I thought we would score a third to give ourselves peace of mind.

“But it's a very good win, we also played well with ten men. I liked the effort and the atmosphere. We have showed that we are able to beat a direct rival and play good football. I hope it will continue."

Elsewhere in the French top flight, Leonardo Jardim’s Monaco are up to 11th thanks to a 1-0 win over Dijon on Saturday with Adrien Silva, Gil Dias and Gelson Martins in the line-up, while Paulo Sousa and Bordeaux dropped to 7th after drawing 1-1 at Nice in the weekend’s opener at Nice on Friday night.

Flamengo came from behind to beat Bahia 3-1 at the Maracanã on Sunday on a weekend which saw them take a big step towards securing the Brazilian title. Palmeiras’ failure to beat Corinthians on Saturday night meant Mengão were given the opportunity to extend their advantage at the top against Bahia in Rio de Janeiro.

Jesus’ men trailed 1-0 at the break due to Willian Arão putting through his own net in the build-up to half time. However, once again Flamengo showed their resilience and second-half goals from youngster Reinier and forwards Bruno Henrique and Gabriel Barbosa gave the home side all three points.

With just six matches left to play in Brasileirão, some are already speculating about when Jesus and Flamengo could be crowned champions. With a midweek match against Rio rivals Vasco Da Gama, there is potential for the title to be decided as early as next Sunday, should Jesus’ side continue winning and Palmeiras fail to triumph at Bahia.

Juventus boss Maurizio Sarri issued glowing praise of Cristiano Ronaldo after the Portugal captain failed to play through the pain during Sunday evening’s 1-0 win over AC Milan. Ronaldo was visibly frustrated at having to leave the action early, with Sarri substituting his star man with less than an hour played ahead of replacement Paulo Dybala scoring the winner. 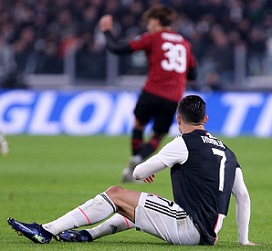 “We must thank Ronaldo, because he made a sacrifice to be there tonight in a difficult situation,” Sarri said after the match. “He did everything possible to play, but I saw he was not well and thought it best to take him off.

“It’s only natural a player is going to be irritated to leave the pitch, especially when he worked so hard to be there. Over the last month, he has had this little knee problem, he had a knock in training and it hurt the collateral ligament. When he trains at high intensity or plays, it unbalances him, so he ends up overcompensating and it damages the calf and thigh muscles.

“It is affecting his performances and he is not at his best at the moment. All players who are trying to give their best will have at least five minutes of being annoyed when they are substituted, but a coach would in general be much more worried if he didn’t seem upset.”

There was more bad news for Portuguese in Italy on Sunday, with Paulo Fonseca’s Roma beaten 2-0 at Parma. The defeat – Roma’s second in four days – saw the Giallorossi drop to 6th and ended a run of six games without losing in Serie A. "The team is tired at the moment and we have seen it, it is not a question of attitude, but right now we are not fast and responsive,” Fonseca said. “The break will be useful.”

Finally, Marco Silva secured a crucial win in England with Everton on Saturday. The Toffees, who lost Portugal midfielder André Gomes to serious injury last week, beat Southampton 2-1 away from home for what is just a second victory in eight league games. “I am very pleased with how we ended the game – and how we managed the game,” said Silva, who had previously seen his team slump close to the relegation places.

“We deserved the three points. The result was really important for us. All of us want to be in a different position but you have to look for a different picture.”