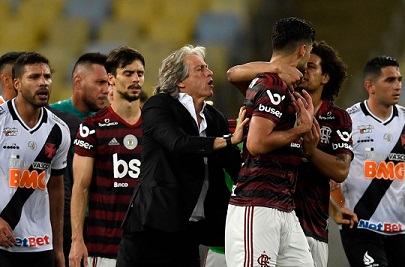 Jorge Jesus says he is keen to ensure his players avoid any emotional collapse, after watching Flamengo share eight goals in a classic Rio de Janeiro derby with Vasco da Gama at the Maracanã Stadium.

Flamengo twice led and twice trailed on Wednesday evening, with Vasco ultimately snatching a point in the 4-4 draw with a 93rd-minute equaliser. Following a match with eleven bookings, scuffles between opposing players continued after the game leading to a remarkable attack on Flamengo striker Gabigol by a Vasco coaching staff member.

The night got off to the perfect start for Flamengo, who went into the match with a 10-point lead over nearest challengers Palmeiras at the top of Brasileirão. Everton Ribeiro put Jesus’ men ahead inside the first minute, but Vasco stunned the home crowd by taking a 2-1 lead, before Fla levelled the scores at 2-2 going into half time.

Vasco continued to find space behind their opponents’ defence during transitions and re-took the lead early in the second period. In-form Bruno Henrique came to Flamengo’s rescue with a second-half double to put them 4-3 up, but a late stoppage-time strike by Vasco substitute Ribamar saw the teams share the spoils.

“Everyone who came to Maracanã to see the game, regardless of their team, got a show, an excellent game,” Portuguese coach Jesus told the media. “For Flamengo it was a bitter result. But we added one more point, it could be two more, but we are five matches from the end. Regardless of your ambitions, a derby is always complicated in any country, whether in Brazil or Portugal. Everything changes, you change and usually those who are lower in the table change even more.

“As a coach, I have concerns and we will try to correct the team defensively. But Flamengo's attack penalises opponents. Vasco made our defence concede more than normal. I will analyse. Our team knows how to reorganise quickly when we lose the ball, but today we did not reorganise quickly. And that was one of the reasons we conceded four goals.

“We conceded four goals due to Vasco’s quality and because we weren’t balanced. It was a wonderful spectacle from a football standpoint. There were a lot of defensive mistakes, but that’s the game. If there were no mistakes it would always be 0-0.”

The game ended on a sour note, with players clashing after the final whistle. Veteran former Braga, Benfica and Sporting boss Jesus entered the field to break up a dispute involving defender Pablo Mari, while the most unsavoury incident saw a Vasco staff member – since identified as André Souza – appearing to kick out at Flamengo forward Gabigol.

Asked to comment, Jesus stated: "Verbal incidents are normal. But when a coach enters the field and assaults a player as did the Vasco staff, whom I don't care to name, then it's serious. It was lack of respect to Vasco's history. He has no right to be at Vasco.”

“Our rivals are more worried than us”

The draw means Flamengo can no longer win the championship as soon as this Friday. As it stands, Mengão have an 11-point advantage over Palmeiras with five games to play, although the defending champions in 2nd have a game in-hand. Flamengo travel to Grêmio on Sunday, while Palmeiras head to Bahia.

“The players are human, they have dreams, anxieties,” Jesus said. “So it is up to me to make them a more of rational team than an emotional team. Today we have lost some of our emotional and tactical balance. This is what a coach has to feel and pass on to his players. When you are in a club that has won only one championship in 25 years, you are not used to winning. So when you're not used to it, you doubt things. And I’m certain that's not what will happen to my players.

“We left with the feeling that we could have won the game. But also with the certainty that we have not lost in 23 games, we are the leaders and our rivals are much more worried than us.”