ENGLAND: “I was happy for an hour” Mourinho reflects on debut Spurs win 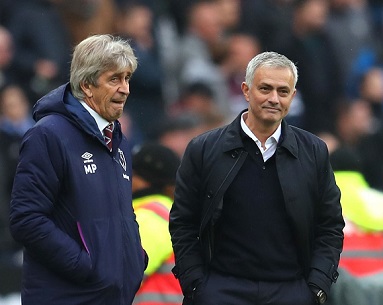 José Mourinho got off to a winning start as coach of Tottenham Hotspur with an impressive 3-2 victory over West Ham United at the London stadium on Saturday afternoon.

Mourinho’s side earned their first away win of the league season after a commanding performance during the first hour saw them take a 3-0 lead, with the Portuguese boss citing fatigue as the main reason for a late drop-off.

Spurs, who announced Mourinho’s appointment on Wednesday, dominated the first half and registered 14 attempts on goal while their city rivals managed just two. Hueng-Min Son finally broke the deadlock ten minutes before half time with a smart finish, before the Korean turned provider for Lucas Moura who arrived at the back post to make it 2-0 in the 43rd minute.

Harry Kane made the game appear safe with a third just minutes after the re-start, but West Ham refused to give up and Michail Antonio pulled one back (73’) and Italian defender Angelo Ogbonna gave the scoreline a more balanced appearance with a consolation during injury time.

“I was really happy for an hour,” Mourinho said after the match. “Obviously I was very very happy. We were playing well. We were bringing things we trained in the week into the game. We had the chance to get the 4-0 to kill the game.

“I think we are lucky that I have so many years in the Premier League so I told the players at half time, even if we go to 3-0 the game will still be open on 85 minutes. I think they understood that. For the last 25 minutes of course there was fatigue, people coming from the national teams, all the emotions of losing their manager and another one coming. Clearly fatigue in the last twenty minutes.”

Many have remarked on Mourinho’s happy demeanour since his arrival with Spurs, an observation which the former Porto boss has looked to play down. However, having displayed especially joyous reactions to the second and third goals, the Tottenham’s in-house channel asked Mourinho about his celebration for Lucas’ strike in particular.

“It wasn’t a knee slide, it was too hard to slide,” Mourinho joked. “It’s not just passion, we did something that we did in training. Lucas arrived in that position as a result of a sequence we did in training. For a coach, for my staff, we thought about it, we prepared it and we trained it. When it happens, it’s the best feeling a coach can have.”

The previous season Spurs had some really intense matches. What will they be able to pull out his season with their new Portuguese coach? Only time will tell, we should sit back, enjoy and find out during the season.

Next up for Spurs is a clash with Olympiacos on Tuesday in the Champions League, with Mourinho making his debut on the home bench. A win over Pedro Martins’ Greek side would guarantee progress to the knockout stages from Group B.