Flamengo conquer South America under Jorge Jesus: “The most important title of my career” 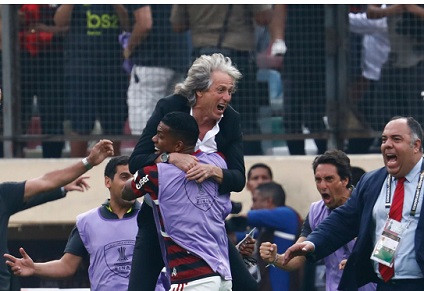 Jorge Jesus’ Flamengo produced a sensational late comeback to win the South American Copa Libertadores for the first time in 38 years, with a dramatic 2-1 victory over River Plate in Lima.

Flamengo striker Gabriel Barbosa struck twice in the closing stages to turn defeat into victory and crown the Rio de Janeiro side champions of the continent. For vastly experienced Portuguese boss Jesus, the result secures him idol status at the club just five months after arriving in Brazil.

Having won the Copa Libertadores, and on the cusp of winning the Brazilian championship, Jorge Jesus will be eyeing a brilliant treble by lifting the World Club Cup in December. Punters who have already come up trumps wagering on the Rio team will no doubt be visiting the PowerPlay website to bet on Flamengo overcoming Liverpool in the tournament hosted in Qatar.

The Estadio Monumental was the setting for the clash between two of South America’s best supported teams, with an 80,000 capacity crowd reflecting the scale of the showdown as fans of both clubs made the long journey to the Peruvian capital. Flamengo arrived as favourites in the eyes of many, despite defending champions River’s success in the competition in recent years.

River’s greater experience appeared to have been underestimated for much of the match, particularly after the Argentines took a 14th minute lead through Rafael Santos Borre following hesitant defending in the Flamengo ranks. The Brazilians struggled to respond, and River’s intense and organised pressure prevented Jesus’ men from playing through the lines and establishing any real rhythm to their now famous attacking style. 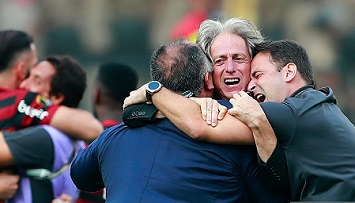 Having failed to put River under any real pressure, signs of hope started to appear for Fla during the second half. Gabriel Barbosa and Everton Ribeiro both missed golden chances to level, after which the introduction of former Porto playmaker Diego (65’) added experience and poise, while River’s inability to sustain their press allowed for more space for Flamengo to pick passes and establish some pressure.

In a game of few chances, River dropped deeper as the clock ran down, seemingly in control despite their opponents enjoying more freedom in the final third. Fla’s big moment arrived in the 89th minute when Bruno Henrique drove infield and fed Uruguayan Giorgian De Arrascaeta, who picked out the familiar figure of Gabriel Barbosa at the back post for the simple task of tapping in.

Euphoria for the travelling Brazilian fans, but with the match headed for extra time Gabigol wrote his name into Flamengo folklore with his second just a few minutes later. River’s defence appeared to still be in a daze when a long ball dropped between the centre-halves and Gabigol was sharp enough to lash his finish past Franco Armani in the 92nd minute.

“My most important title”

Match-winner Gabigol was sent off soon after for a second bookable offence, as was River’s Exequiel Palacios for kicking out at a floored Bruno Henrique, but with both sides reduced to ten the final whistle sounded to send Jesus and his companions into rapture. Having been in management for almost 30 years, the veteran Portuguese coach admitted becoming South American champions is his biggest achievement

“Yes, it is the most important title of my career to date,” Jesus told reporters. “Libertadores is to this continent as the Champions League is to Europe. This final was watched in 176 countries and millions of people. Two great teams, either could have won. These fans are amazing.

"We needed to win titles, because we aren’t so big on this. One is won, the championship is so important to me but for the fans this was the most important and fortunately we reversed the score. For 40 years they dreamed of this trophy. I’m so happy.”

The story of Jesus with Flamengo has captured the attention of the Portuguese public in unprecedented fashion, with intense coverage and interest in Jesus’ home country. The former Braga, Benfica and Sporting boss has repeatedly expressed his pride at such attention, and dedicated the win to his homeland.

“A word for Portugal. I know that Flamengo has been a great passion, that many millions of Portuguese were pushing for Flamengo to win. This is for all my friends and to the Portuguese people who appreciated me. Not only was Flamengo the winner, for me the victory goes to Portugal. A big kiss for all Portuguese and I'm very proud to be Portuguese.”

Despite his remarkable success, there remains a caution in the way Jesus responds to the floods of questions from local media. When told that he was now an idol of the Flamengo fans, the 65-year-old responded: “I have had a long career. I know that football is cruel. When you win, everything is beautiful. When you won’t win there are doubts, it is irrational. Today I am an idol because I am winning.

“I have many years in football and have been through many situations. I was even annoyed with my assistant, João de Deus, 20 seconds from the end, because he was shouting 'It's over, it's over'. I've lost titles ten seconds from time and football is cruel. The game ends only when the referee blows his whistle and I did not want anyone to party until the game is over.”

Reaction to the triumph has been vast, as expected, leading with Flamengo vice-chairman Marcos Braz who attributed the comeback to Jesus’ influence. "I think we won the game at half time. Those inside the dressing room saw what happened. Everyone was calm, but very concerned. However, Jorge Jesus always insisted that we play with the ball. With calm, we would turn the game around. Now we celebrate, it was almost 40 years without winning a Libertadores title. I hope that from now on it won’t be so long between winning,” said Braz.

Focus for Flamengo soon switches back to confirming themselves as Brazilian champions, which could happen as soon as Sunday evening should Palmeiras fail to beat Gremio. If the defending champions make Flamengo wait, Jorge Jesus’ men can seal the title at the Maracanã against Ceara on Wednesday evening.

If, as expected, Flamengo complete their remarkable double, Jesus’ future will soon become the hottest topic in the city. The Portuguese has not yet signed an extension on his contract, which runs out in June, with speculation ranging from his continuation until the summer to perhaps leaving for a return to Europe in January.

“There is the clause for being able to leave in January, it is true,” Jesus said. “This is good for both parties, but I feel good in Rio, I feel safe in Barra da Tijuca.

“The people of Flamengo are already part of my family.”

Phenomenal achievement by Jorge Jesus to win the double for Flamengo, in such a short time at the club! The Brasileirao is one of the most competitive leagues in the world, with loads of very big clubs and candidates for the title. While as for...

Phenomenal achievement by Jorge Jesus to win the double for Flamengo, in such a short time at the club! The Brasileirao is one of the most competitive leagues in the world, with loads of very big clubs and candidates for the title. While as for the Copa Libertadores, well I would imagine it's arguably almost as demanding to win as the Champions League. He has certainly gone down in the history of Brasil's biggest club!

In my view, JJ is the best Portuguese coach currently, at least for the kind of football I like to watch: full on attacking and pro-active style. He had his criticism while at Benfica, including occasionally from me...but in hindsight he did fantastically well for us. Took us to two successive Europa League finals, beating strong opponents along the way, and both finals we lost very unluckily indeed having been the better team in both finals. Certainly in terms of European play, when I look at the shambolic performances and results we've been having in recent seasons....I miss the days of JJ. With him in charge, we could go even away from home and play strong European opponents on an equal footing, playing good football without fear. While at Sporting in his first season there, he brought the club by far the closest they've been to winning the league in God knows how long.

He's a top coach, and I would in fact like to see him take over the Selecao after Santos. I think with his attack-minded brand of football, he could really get the best out of this exciting generation of young talent we have.

I agree with you Andre! Jesus is a legend! He did everything for Sporting to win, and if it weren't for Bryan Ruiz missing those two sitters in the final derby vs Benfica, Sporting would have won that game and most likely won the league. That...

I agree with you Andre! Jesus is a legend! He did everything for Sporting to win, and if it weren't for Bryan Ruiz missing those two sitters in the final derby vs Benfica, Sporting would have won that game and most likely won the league. That would have been a legendary achievement. Anyway I'm happy for his new success!

Massive congrats to Jorge Jesus! Great achievement by an amazing top class manager! I'm not surprised by his success and Im happy for him. I still wish he was at Sporting.

Fernandes
This comment was minimized by the moderator on the site

Jorge Jesus is a great manager.
Would love to see him coach this current Portugal side.

Not what you said when he got the job.

I'd love to see JJ win the World Club Tourney, and then get out. He established his legacy. I hope he leaves on this high note with the Brazilians still eating their words. No need to push your luck JJ. You did it brother!

I'm of the opinion that due to the high-stakes nature of today's game and how players have seemingly more power, high-profile managers should stay for no more than a year at their clubs, and this is especially true if they have had the success JJ...

I'm of the opinion that due to the high-stakes nature of today's game and how players have seemingly more power, high-profile managers should stay for no more than a year at their clubs, and this is especially true if they have had the success JJ just had. Hit it and quit it. Move on to the next. Because it always ends up going south at some point. Example, Mourinho wouldn't be as vilified if he had left Man U after his Europa triumph.