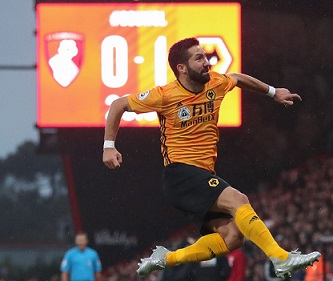 João Moutinho’s stunning free-kick inspired Wolverhampton Wanderers to a 2-1 victory at Bournemouth in the Premier League on Saturday, after which the Portugal midfielder signed a new contract at Molineux.

Moutinho opened the scoring at the Vitality Stadium after twenty minutes, putting Wolves ahead with an unstoppable set-piece. The former Sporting and Porto man then instigated the second when his quickly-taken free-kick found Adama Traore who crossed for Raul Jimenez to make it 2-0 after half an hour.

Bournemouth pulled one back just before the hour mark but Nuno Espírito Santo’s side held their advantage and moved up to 5th in the Premier League. “I think we performed really good, it’s a reference for us, the first-half was very good,” Nuno said after the match. “We have to keep on going, we’ve had a lot of games already and we still have a tough challenge Thursday, then Sunday. What you did before is good, but only serves as a reference for the future.”

For Moutinho, a first goal of the season was celebrated with a new improved contract with Wolves, tying him to the club until 2022. By that time Moutinho will be almost 36, but the commitment shown to the Portuguese is a reflection of the midfielder’s consistency since arriving in a bargain €5.6m deal from Monaco last summer.

“It was a very easy decision because I feel very good here,” Moutinho said. “It’s a big club that wants to do something good and I want to do my best to help.

“We did a great job last season and this season we’ll try to do better. That’s what we’re going to do and I’m going to try 100 per cent to help the club to improve.

Wolves sporting director Kevin Thelwell was glowing in his praise of Moutinho after the extension was announced. “It’s terrific news. In the time here’s been here, everyone has been able to see he’s a top player. Top performances on the pitch, top professionalism off the pitch. He has an amazing mentality and has made a really big impression on everyone at the football club.

“He’s been pretty much available for every training session, available for every game, and he’s showing no signs of slowing up whatsoever. We are delighted he’s decided to commit himself to us for the foreseeable future and we look forward to many more performances like we saw today.”

Anyone who doesn’t watch Wolves games is missing out on a special talent. Moutinho has been pure class.
I know I’m in the minority. But, I think that class needs to be on the field for every Portugal game.

Agree, I have become a Wolves fan over the last couple years. He has been pure class, still has a role on the national team as a starter or key reserve off the bench. The most important player over the last 10 years after CR7 and Pepe on the...

He’s also been a great example for a young team. Not much ego.