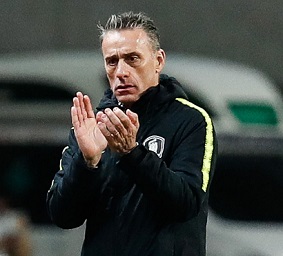 The four-team tournament pitted Bento’s men against Japan, China and Hong Kong and Korea managed wins against all three sides to clinch the trophy having been runners up during the last two editions of the East Asian competition.

Korea did not concede a goal in any of their three matches, with an opening 2-0 win over Hong Kong followed by a 1-0 win over 2015 winners China. Wednesday’s final and deciding group match against runners-up Japan was settled by a 28th-minute goal from Vancouver Whitecaps midfielder In-Beom Hwang in front of 29,000 spectators at Busan Asiad Main Stadium.

“I would like to say congratulations and thanks to the players and coaching staff,” Bento said duriing his post-match press conference. “I also thank everyone for their continued support of our team. ”

“It was a good game and both teams played fiercely. We won by thanks to our players reading the flow of the game at every moment and understanding what to do. I think it's a fair victory. Although they did not have enough time to recover after the second game, they sacrificed for each other. I want to say congratulations to the players once again. ”

"We've figured out how Japan were going to build up from the goalkeeper and how to put pressure on. We also prepared our counter-attack using quick wingers. These strategies, combined with the player's work, helped us win. Most of all, it's important to have a good game while maintaining our style. ”

“Our style is important”

“We can win, win or lose. But it's important to be sure of what we are creating and what our style is. We share trust and confidence with the players. I think we have made our own identity in the past year. I will continue to lead the team as it is in the future.”

The triumph is Bento’s first trophy since winning the Greek Super League with Olympiacos in 2017. President of the Portuguese Football Federation Fernando Gomes offered his congratulations on Thursday, released a statement saying: “I warmly congratulate Paulo Bento on winning the East Asian Cup. With this triumph, the national coach of South Korea once again valued the name of Portuguese coaches and Portuguese football. Congratulations!”