ITALY: Ronaldo brings in 2020 with hat-trick in Juve win [video] 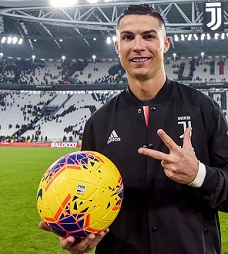 Cristiano Ronaldo started the new year in the same way he finished the last with three goals and an assist in Juventus’ 4-0 victory over Cagliari in Turin on Monday afternoon.

Having ended 2019 with six goals in seven matches for the Bianconeri, Ronaldo’s hat-trick against Cagliari moved the Portugal captain onto 13 Serie A goals from just 15 appearances and helped Juventus move back to the top of the table.

The match was goalless at half time, but Ronaldo’s typical sharp instincts led to the opener less than five minutes after the re-start. Ronaldo seized upon a miscommunication in the Cagliari defence and clinically fired past Robin Olsen, and the Seleção talisman made it two midway through the second half from the penalty spot.

Ronaldo teed up Gonzalo Higuain for the third Juve goal of the day with a precise throughball, before completing his treble with a calm left-footed finish after good work from Douglas Costa. Speaking after the match, the 34-year-old was keen to remain humble and focus on what looks set to be a close-fought title battle with Internazionale.

“We’re improving game by game, not just in defence, but also in midfield and attack. We are a complete squad and have to work together in every move. I don’t know if I’ll watch[Napoli vs Inter] but obviously I hope Inter lose, because that would help us. In any case, we’ve done what we needed to do and can only wait now.”

The hat-trick was Ronaldo’s first in Serie A and lifted him into second place in the top goalscorer list in Italy’s top flight. The Portuguese still has a tough task to catch leading marksman Ciro Immobile, who leads the way with 19 goals, six more than Ronaldo.

CR7 is such a legend. Even at almost 35, he still is producing. I don't think we will see another Portuguese reach these heights in our lifetimes. Just enjoy the moment because it will not last much longer.