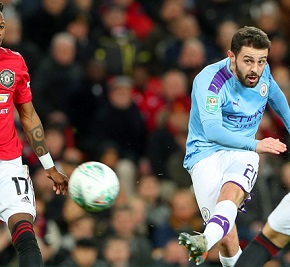 Bernardo Silva scored a sensational long-range goal and later provided an assist as Manchester City put themselves firmly on track for the Carabao Cup final with a 3-1 victory over rivals Manchester United.

City dominated much of the first half at Old Trafford to command a 3-0 lead at the break, with Bernardo’s opener on 17 minutes the eye-catching moment of a match in which the visitors avenged a 2-1 defeat to United on home turf last month. Diogo Dalot was an unused substitute for Ole Gunnar Solskjaer’s United.

Portugal star Bernardo spoke to the press after the match but opted not to reflect on his strike, which saw him driving infield from the right and unleashing a shot into the top corner past David De Gea. “It was good for me, I’m happy to help the team and get this win, hopefully in a few weeks we can finish the job and get to the final,” Bernardo said.

Bernardo was given a different, freer role than usual in a striker-less formation selected by Pepe Guardiola, sparking discussion from football analysis experts, who agreed it is a position that got the best out of the Seleção playmaker. Bernardo himself was delighted with his team’s display.

A STUNNER FROM SILVA ⭐

Manchester City lead against Manchester United in the first leg of their Carabao Cup semi-final.

Could have scored four or five - Bernardo

“I think we started the game very strongly, it was a very good first half for us. I think we could have even scored four or five goals in the first half, we missed a few chances. But we are happy with the win, obviously we didn’t want to concede that goal in the second half but it’s never easy to come here to Old Trafford and play against this good team which a few weeks ago beat us at the Etihad.

“Very happy with the win, nothing is over as we still have 90 minutes at home. Derbies are always special games for the fans, being able to give them this win after the defeat at home with their support, they deserve it because once again they were amazing.”

Meanwhile, City boss Pep Guardiola succinctly summed up the contribution of his no20 from Portugal, telling Sky Sports: “[It was an] incredible goal. He was so good, as always. Bernardo is a fantastic player.”

The other semi final sees Ricardo Pereira’s Leicester City host Aston Villa on Wednesday, with the return leg later this month. The final is due to be played on Saturday 29th February.

I didn't see the game, was he used as a winger or free to roam?

Jerrold,
Guardiola was very keen to avoid being exposed on the break like they had been against United last month and as always his way of defending that is to try and dominate the ball even more and get more short passes to avoid giving it away....

Jerrold,
Guardiola was very keen to avoid being exposed on the break like they had been against United last month and as always his way of defending that is to try and dominate the ball even more and get more short passes to avoid giving it away. So Bernardo was listed on paper as the striker in a 4-3-3 but basically they played without a forward and smothered the midfield. Bernardo got lots of freedom.