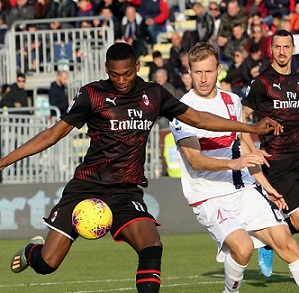 It was an encouraging afternoon for Portuguese prodigy Rafael Leão as the striker scored and showed signs of a positive partnership with Zlatan Ibrahimovic during Milan's 2-0 win at Cagliari on Saturday.

Leão scored the opener and was heavily involved for the Rossoneri, who sealed the point when Zlatan added the second goal on his first full appearance since returning to the club. The partnership between the players, with 18 years difference between them, has been the focus of Leão’s social media activity this week.

Leão had already set up a headed chance for Zlatan in the first half and missed a good opportunity himself, before the former Sporting man put the visitors ahead within a minute of the re-start. The 20-year-old’s scuffed finish took a deflection and looped into the net, but a second goal of the season and his first since September should do wonders for the Milan youngster.

Zlatan made it safe with a deft left-footed finish and while the Swede’s impact dominated many of the headlines, for Leão the guidance of his senior strike partner is clearly a potentially big factor in helping the Portugal youngster adapt at San Siro following a pricey move from Lille last summer.

"I see Ibrahimovic as a big brother,” Leão told Sky Sports Italia earlier this week. “Since he arrived, he’s been talking to me, giving me advice on how to improve, how to position myself in the penalty area. He’s a great player and I want to learn as much as I can with him by my side."

Milan are in 8th place after the win, five points adrift of the European spots in Serie A.

“The players were brave and I believe all our supporters are proud of them. AC Milan? It’s a reward for the players, but big names do not scare us.”