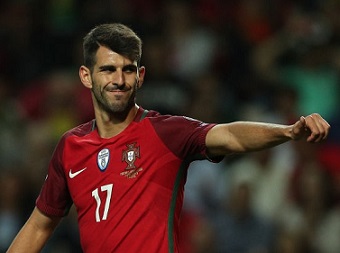 A remarkable afternoon in Greek football saw three different Portuguese players find the net in AEK Athens’ 3-0 victory over Larissa, with Seleção international Nélson Oliveira among the scorers in the capital on Sunday.

Midfielder and AEK vice-captain André Simões opened the scoring while former Paços de Ferreira defender Hélder Lopes registered his first goal of the season, as AEK strengthened their position in 3rd place in the Super League.

The first goal of the game arrived on the stroke of half time and had a Portuguese provider as well as scorer. As the clock reached the second minute of injury time at the end of the half, 17-time Portugal international Oliveira made space on the right to cross for Simões, with the ex-Moreirense man converting from close-range for his second goal of the season.

Oliveira, who made his international debut in 2012 after coming through the ranks at Benfica, doubled his team’s advantage less than five minutes after the re-start. The 28-year-old produced a clinical finish with his left foot to mark his 9th league goal of the season and lifting Oliveira up to 3rd place in the league’s top goalscorer list.

The final goal came just after the hour mark through left wing-back Lopes, who neatly controlled a cross from Petros Mandalos before calmly slotting past Larissa goalkeeper Ogmundur Kistinsson. Lopes, 31, is in his third season with AEK and has started ten of the team’s 19 matches so far in the league campaign.

Elsewhere, it was business as usual for the top two sides in the Super League, both of which are guided by Portuguese bosses. Pedro Martins and Olympiacos are the table-toppers after José Sá and Rúben Semedo played in a 4-2 home win over Aris, while champions PAOK are just a point behind in 2nd place after beating Asteras Tripolis 3-1 with captain Vieirinha playing the full 90 minutes.