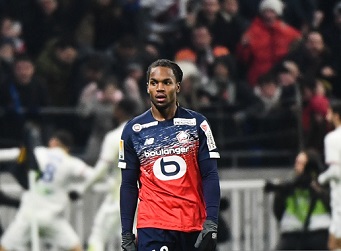 It was an eventful night for Portugal’s Renato Sanches in the French Coupe de la Ligue semi-final on Tuesday evening, with the midfielder scoring a superb goal for Lille and helping create another, before cruelly missing the final penalty in the shootout as Lyon progressed.

In what will be the final edition of the competition, the sides met at Lyon’s Groupama Stadium to decide who would meet either Rennes or Paris Saint-Germain in the final next month. While the hosts dropped Anthony Lopes for cup goalkeeper Ciprian Tătărușanu, Lille selected vice-captain José Fonte in their line-up alongside Sanches, with Xeka and Tiago Djaló having to settle for places on the sidelines.

Lille coach Christophe Galtier deployed a 4-2-3-1 formation, with Sanches occupying the right-sided role behind striker Nigerian Victor Osimhen. The former Benfica man caused problems from the start, and had already created one opportunity for Jonathan Ikone before putting Lille ahead after just 12 minutes. Sanches reacted to a loose ball breaking to him outside the box by connecting with a sweet first-time finish on his left foot, sending a low shot past Tătărușanu.

Lyon were not behind for long, with Gabriel adjudged to have handled inside the penalty area and Moussa Dembele converting the subsequent spot-kick just minutes after Sanches had opened the scoring. Portuguese youngster Djaló entered the action in the second half, as the score remained level at 1-1 until almost five minutes from time when Lyon looked to have snatched victory through Houssem Aouar’s brilliant finish.

However, Lille were not beaten and Sanches played a part in their stoppage-time equaliser. The summer recruit from Bayern Munich lofted a dangerous ball into the Lyon box and from the resulting panic Jonathan Bamba was fouled by Rafael. VAR confirmed the decision and Loic Remy stepped up to score and send the match to penalties.

Lille failed to use their momentum in the shootout and it was somewhat cruel that two players crucial to their late revival were guilty of spurring their penalties. Just minutes after winning the match-saving spot-kick, Bamba saw his effort saved in the opening attempt of the shootout, with Sanches later missing the target from twelve yards with the final penalty to give Lyon a 4-3 win on the decider.

Speaking after the match, Sanches admitted that the missed penalty was a personal blow, but also spoke about the positive nature of his performances in a Lille shirt. “I’m confident at the moment, I want to play and give my best to help the team, in the same way that they help me,” he said. "I am in a good period of form, it is important for me but what is really important is I want to help the team. The penalty? I’m really disappointed with my failure to score.”

However, French paper L’Equipe were adamant the 22-year-old receive some positive reports on his showing. The notoriously critical publication wrote: “He not only scored the Lille goal with a strike from twenty meters, he understood his role, especially in the second half, and was inspired in his changes of pace and direction. Technically he was far above and did not drop his desire. Unfortunately for him, it was his shot that sent OL into the final. Which does not change the quality of his performance.”