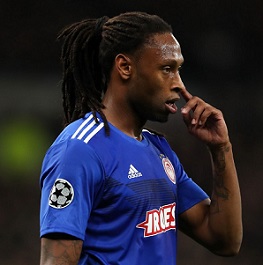 A typically eventful evening for Portuguese on Wednesday evening, with players making headlines for varying reasons. Cristiano Ronaldo scored again to help Juventus beat Paulo Fonseca’s Roma in the Coppa Italia, while Ricardo Pereira was also on the scoresheet for Leicester City in England.

However, there was a less positive story in Greece as Rúben Semedo was sent off towards the end of Olympiacos’ win against OFI after a physical confrontation with a ball boy resulted in the defender dismissed for violent conduct.

Ronaldo’s goal to set Juventus on the way to a 3-1 win over Roma in Turin was his 13th strike in his last 10 matches for the Bianconeri. The Portugal captain’s clinical left-footed finish put the hosts ahead after 26 minutes and Juve went on to book their place in the semi-finals of the Coppa Italia.

Speaking after the match, Juventus boss Maurizio Sarri praised Ronaldo’s age-defying performances, but refused to take credit for his role in the soon to be 35-year-old’s form. “Ronaldo is in extraordinary physical and mental condition, scoring with remarkable consistency,” Sarri remarked.

“On an individual level, I don’t see what Ronaldo could improve. Perhaps in some defensive moments. I cannot take credit for Ronaldo’s current form, you can only give credit to his mother for creating such a specimen!”

Meanwhile, Roma manager Paulo Fonseca admitted that Juventus were too clinical for his side. “Juventus scored in both the first and second time they got anywhere near our goal,” said the former Porto coach. “They scored on the counter-attack and players like Ronaldo don’t miss in those situations.”

Pereira “not focused on Champions League” after goal in Leicester win; Semedo sees red in Greece

Ricardo Pereira scored his third goal of the season and registered an assist as Leicester City got back to winning ways with a 4-1 victory over West Ham in the Premier League. Pereira provided a tap-in for Harvey Barnes midway through the first half, before Barnes returned the favour by picking the ex-Porto man out to put The Foxes 2-0 up just before half time.

“We are not thinking about the Champions League for now,” Ricardo told the BBC after the game. “We still have a long way to go. We wanted to get back to winning ways after having what were some really bad games for us.”

Finally to Greece, where Rúben Semedo was given a late red card for his part in a confrontation with a ball boy during Olympiacos’ game with OFI. Pedro Martins’ Super League table-toppers won the game 1-0, but Semedo’s dismissal in stoppage time attracted many of the headlines. Martins, who did not field Daniel Podence as the midfielder’s move to Wolves is expected to go through, did not comment on the incident, insisting he was yet to see a video. “I have no opinion because I did not see it, when I have rest assured I will tell you,” he said.

Rúben Semedo sent off during injury time of Olympiacos’ win at OFI in Greece for interaction with a ballboy pic.twitter.com/OQ0jlwSPAv

Meanwhile, AEK Athens won 3-1 at Volos, with Nélson Oliveira suspiciously left on the substitutes bench as he also finds himself linked with Wolves. Hélder Lopes set up two of AEK’s goals from left wing-back during the victory. Abel Ferreira’s champions PAOK travel to Lamia tomorrow looking to close the four-point gap to Olympiacos.