Bruno Fernandes completes Man Utd move: “Ronaldo made me a fan of this club” 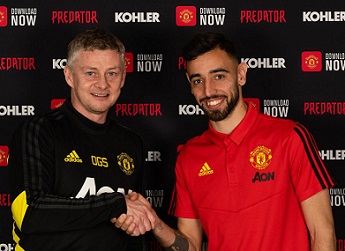 Bruno Fernandes finally completed his protracted transfer to Manchester United on Thursday, leaving Sporting for the English giants after 2.5 years with the Lisbon side.

United will reportedly pay an initial €55m fee with further bonuses potentially seeing the eventual cost of the deal rise to as much as €80m. Fernandes has signed a 5.5-year contract until 2026 at Old Trafford, where he will link up with Diogo Dalot in Ole Gunnar Solskjaer’s squad.

Fernandes will be the sixth Portuguese to play for United and the third to make the move from Sporting, following Cristiano Ronaldo in 2003 and Nani in 2007. Other Portuguese to feature for the Red Devils include goalkeeper Joel Pereira and forward Bebé, along with Dalot who arrived from FC Porto in 2018.

“My love of Manchester United really started when I used to watch Cristiano Ronaldo play and ever since then I have been a big fan of this great club,” Fernandes told the club’s media after his signing was announced.

🔴 🤝 🇵🇹#MUFC is delighted to announce the signing of Bruno Fernandes!

“For me to now play for Manchester United feels incredible, I have worked hard to get to this moment and I can promise the fans that I will give everything for the badge to help bring us more success and trophies.

“I want to thank Sporting for everything they have done for me.  It is surreal to hear the nice words that have been said about me from players that used to play for this team.  A massive thank you to Ole and everyone at Manchester United for the trust they have shown in me and I can’t wait to start to repay that on the pitch.”

Fernandes scored 63 goals and registered 52 assists in137 appearances for Sporting. His final appearance for the Lions saw him play the full ninety minutes in a 1-0 win over Marítimo on Monday night.