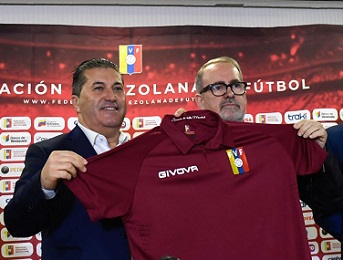 José Peseiro was introduced to the media as the new coach of the Venezuelan national team on Tuesday, with the Portuguese charged with attempting to take the South American country to the World Cup for the first time in their history.

Having spent close to 15 months out of the game since leaving Sporting in November 2018, Peseiro becomes the second coach from Portugal managing in CONMEBOL after Colombia’s Carlos Queiroz, with the pair set to meet in March in the first match of Venezuela’s new regime.

Venezuela have never qualified for the World Cup, but with an ever improving standard of footballer being developed by the country there is hope that qualification for the next tournament is a realistic target. Peseiro himself admitted during his press conference that a place in Qatar is the fundamental objective of his job.

“Venezuela is experiencing it’s best moment, I come with the main goal to reach the Qatar 2022 World Cup,” said the 59-year-old. “There are great quality of Venezuelan players, many of them abroad. I will contact the local and the international players. I will start with those in Europe and then in time, I will try to contact everyone who is at a good level. The doors are open to all players who want to play for La Vinotinto.”

Asked about his approach to football, Peseiro identified an attacking outlook: “All coaches have an idea: more attacking or more defensive. It’s true that I like a team that dominates the game in an offensive way. But it would be crazy to come to Venezuela and think we can play like Sporting in 2005.

Qualification for the World Cup, which sees all ten South American nations in one group, will begin in late March. The top four placed teams will advance to the World Cup finals in Qatar, while the 5th placed side will enter the inter-confederation playoffs for a spot at the tournament. Venezuela’s first game under Peseiro will be away to Colombia in Barranquilla on 27th March.

"I only have four days to train before the first game, I can't come and change everything suddenly,” Peseiro said. “The team already has a base. It's not just about bringing a more offensive football, but to implement a football with criteria in which the possession of the ball prevails.”

Peseiro replaced Rafael Dudamel in the post, with the outgoing coach citing a “rapidly deteriorating relationship with the leaders of the Venezuelan football association” ahead of taking the job as boss of Brazilians Atletico Mineiro. Peseiro becomes the first foreign coach of Venezuela in almost twenty years.