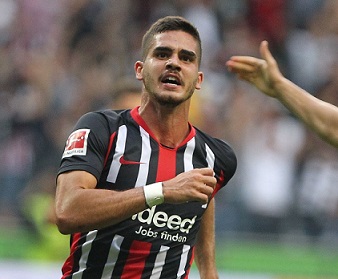 Portugal striker André Silva scored for the second time in the space of a few days as Eintracht Frankfurt hammered Augsburg 5-0 in the Bundesliga, while Gonçalo Paciência also made a late contribution in Germany.

Silva, who scored from the penalty spot in Frankfurt’s 3-1 midweek victory over RB Leipzig, headed in Frankfurt’s third against Augsburg when he met Filip Kostic’s cross with a simple finish shortly before the hour mark. It was the 24-year-old’s first league goal since early October when he netted against Werder Bremen.

Paciência replaced his compatriot on 84 minutes and got himself an assist in the final minute to set up Kostic, after Frankfurt had robbed their opponents immediately from kick-off, making it Paciência’s second assist in his last four appearances. The former Porto man has largely adopted a substitute role since the turn of the year.

For Silva, who arrived at Frankfurt last summer following spells with Milan in Italy and Sevilla in Spain, recent goals and assists appear to have forced him into the team. Speaking earlier in the week before re-finding his goalscoring touch, he said: “It’s not been so good for me, but I deal with it the same as ever, I try to do my best. I’m an experienced player, I’ve played in many leagues and big clubs so I always try to come out of bad situations with a smile and work.”

Frankfurt’s latest win sees them move up to 9th in the table. Silva has five goals from 18 appearances in all competitions, while for Paciência his seven goals have all come in the Bundesliga from 14 starts and five substitute showings.