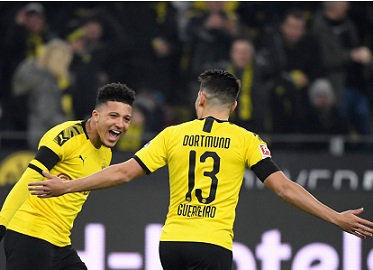 Similar fates were to befall Raphaël Guerreiro and Cristiano Ronaldo on Saturday evening, as both players gave their teams second-half leads only to end up on the losing sides with Borussia Dortmund and Juventus respectively.

Guerreiro’s goal in Dortmund’s 7-goal thriller at Bayer Leverkusen put the visitors 3-2 up well into the second half, but Leverkusen recovered to end up 4-3 winners. Meanwhile in Italy, Ronaldo’s remarkable show of pace and power resulted in putting Juve 1-0 up late on at Verona, who responded with two goals to stun the Serie A champions.

Leverkusen and Dortmund was always likely to be a high-scoring encounter between two of the Bundesliga’s most attacking sides, and a 2-2 half time scoreline left nobody disappointed. Guerreiro’s goal, which finished off a superb team move, put his side ahead on 64 minutes and appeared decisive, only for Leverkusen to score two quickfire goals on 81’ and 82’ to snatch victory.

Raphaël Guerreiro’s goal for Dortmund at Leverkusen this evening pic.twitter.com/vJ19tzgnzK

In Italy, Juventus succumbed to a surprise 2-1 defeat at Verona, made all the more shocking after Cristiano Ronaldo put the Bianconeri 1-0 up with 25 minutes left to play. Ronaldo’s goal had drawn much attention, with the recently-turned 35-year-old running from the halfway line and proving too good for Verona defender Amir Rrahmani – ten years his junior – before finding the bottom corner with a deft finish.

👏 Ronaldo picks the ball up inside his own half, plays a quick one-two, and then has the composure required to finish from there

However, Ronaldo was left disappointed as Verona, who withdrew Miguel Veloso early in the second half, levelled through Fabio Borini (76’) and won the match with Giampaolo Pazzini’s penalty on 86 minutes. As a result, Juventus’ 3-point lead at the top could be reduced by Inter, who face Milan in the Derby della Madonnina on Sunday evening.