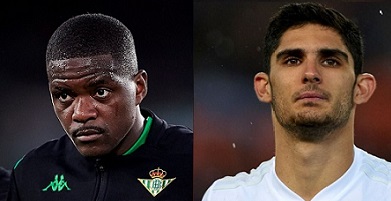 William Carvalho made his first appearance for over four months on Sunday evening, starting for Real Betis against Barcelona in La Liga. The midfielder’s comeback comes in the same week Gonçalo Guedes took his first steps on the field for Valencia after a similar period on the sidelines.

Both players endured losing returns to action, but Carvalho and Guedes will be hoping to stay fit and regain their status as key figures for their club sides ahead of Portugal’s European Championships defence this summer.

Betis coach Rubi named Carvalho in his line-up against champions Barcelona at the Estadio Benito Villamarin, surprising some by selecting the former Sporting man from the start. Carvalho was operated on last October for a herniated disc and had not played since the end of September against Villarreal.

Carvalho played 70 minutes as his side twice gave up a lead to go into half time level at 2-2, before ultimately losing 3-2, with Betis having just 70% possession against former boss Quique Setien’s Barca. Although Carvalho inevitably struggled with the rhythm of the match, Betis were level at 2-2 before he was withdrawn, just two minutes before Clement Lenglet scored the winner for the visitors.

Guedes, meanwhile, made his return for Valencia last midweek in the Copa Del Rey against Granada in a 2-1 defeat. The ex-Benfica forward played 22 minutes, following four months out with an ankle injury, before again being named on the bench this weekend for the trip to Getafe. Valencia were again beaten, losing 3-0 with Guedes this time playing just over half an hour.

As Valencia’s most expensive ever signing, much is expected of Guedes at the Mestalla. Injury issues affected the 23-year-old last season, with Guedes not scoring in the campaign until March 10th shortly after making his comeback. During the closing weeks of the season the Portuguese contributed an impressive 8 goals and 3 assists.

Back-to-back defeats now see Los Ches eliminated from the Copa Del Rey and down to 7th in the table, meaning Albert Celades’ team are outside the European qualification places. Celades has recently intimated that he sees Guedes taking a central position in the team, rather than the wide areas often occupied since joining the club in 2017.

Elsewhere in Spain, Levante’s Hernâni will have a knee operation on Tuesday after suffering ligament damage in training on Friday. The 28-year-old moved to Spain from Porto last summer but has struggled to convince coach Paco Lopez.

Thanks for the uplifting article. Great way to start the day off ? (Why aren’t you posting anymore?)