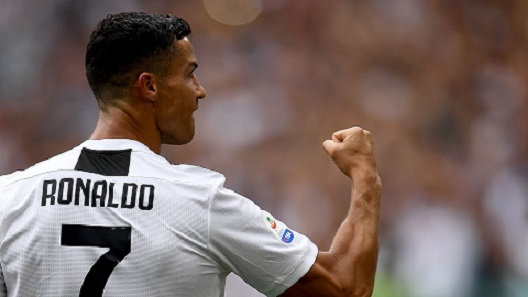 Cristiano Ronaldo celebrated his 1,000th match with another goal in Italy as Juventus beat SPAL 2-1 away from home on Saturday afternoon in Serie A.

The Portugal captain opened the scoring for Juve at the Stadio Paolo Mazza to make it a record-equalling eleven successive league games in which he has found the net, a run during which Ronaldo has scored 16 goals.

Colombian Juan Cuadrado was the architect for Ronaldo’s strike in the 39th minute, playing a nice first-time cross from the right for the Portuguese to convert at close range. Aaron Ramsey doubled the champions’ lead on the hour with a deft finish before SPAL scored what proved merely a consolation from the penalty spot through Andrea Petagna.

✔ Scores in 11 consecutive Serie A game

Ronaldo, who rattled the crossbar late on from a free-kick, now joins Gabriel Batistuta and Fabio Quagliarella in scoring for 11 consecutive Serie A matches. The 35-year-old is set to get his opportunity to break the record next Sunday against title rivals Inter in Turin, after Juve’s midweek Champions League clash with Anthony Lopes’ Lyon.