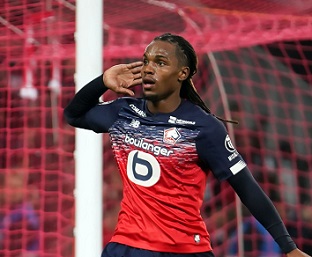 A mixed day for Portuguese in France on Saturday as goalscorer Renato Sanches continued his fine form with Lille, while Andre Villas-Boas and Marseille suffered defeat for the first time since October in Ligue 1.

Sanches found the net for Lille in their 3-0 win over Toulouse, scoring the third for Christophe Galtier’s side on Saturday evening. The result means Lille close the gap to second place, as earlier in the day former Porto boss Villas-Boas watched on as L’OM were surprisingly beaten 3-1 at home by Nantes.

Sanches, who this week told French newspaper L’Equipe that he “feels happy at last” in his new surroundings, has been a revelation of late with Lille. The 22-year-old made the move to Ligue 1 last summer from Bayern Munich for a club record €25 fee and was recently voted Lille Player of the Month for both December and January.

Lille produced a dominant performance in beating Toulouse and Sanches, deployed in central midfield in a 4-4-2 system, was at the heart of much of the play. Loic Remy stole the headlines with a brace, but Sanches recorded a 91% pass completion and rounded off the scoring with a neat finish from Victor Osimhen’s pass following a dreadful clearance from Toulouse goalkeeper Mauro Goicoechea.

Sanches has now scored in three of his last seven starts, while versatility has been a feature of his contribution to Galtier’s team. Sanches has played in both defensive and attacking central roles, while the former Benfica man has played several matches on the right side of Lille’s attack and the occasional spell on the left.

Related article: “I matured at Bayern” Renato Sanches speaks of growth after fighting for his fresh start with Lille

The victory for Lille saw them reduce the gap between themselves and 2nd-place Marseille to nine points, after Andre Villas-Boas’ side went down at home to Nantes earlier in the day. The hosts went 1-0 down on 34 minutes to Anthony Limbombe’s opener but quickly replied through Morgan Sanson to go into the break level. However, Abdul Kader Bamba’s goal early in the second half did the damage for Nantes, who added a third on the break in stoppage time.

The defeat was Marseille’s first in the league since October and the Portuguese coach made it clear his side were not at their best. “We didn't play well, Nantes' victory is deserved," he began in his post-match press conference.  “They were well organised and played better than us. Our run ends, too bad it is at the Vélodrome with a crowd who were there for us. But we were not able to continue it. We need to keep going and look for consistency. We want to start again against Nîmes and we will have to recover, mentally more so than physically. Forget today’s result, we should congratulate the team on an extraordinary journey.”