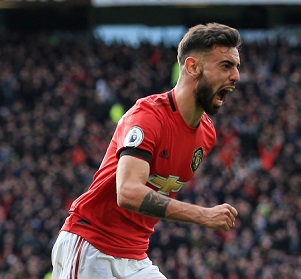 Portugal midfielder Bruno Fernandes put in a Man of the Match performance, including his first goal in English football, to help Manchester United to a 3-0 victory over Watford.

Fernandes won a first-half penalty from which he scored United’s opener, before later playing a role in goals for Anthony Martial and Mason Greenwood as the Red Devils strengthened their pursuit of a top four finish.

The game appeared to be heading towards a goalless first half when January arrival Fernandes latched onto a throughball from Daniel James and was brought down by Watford goalkeeper Ben Foster. Fernandes took the penalty himself and after a skip in his run-up to delay his strike, sent Foster the wrong way to open his United account.

Martial’s second for United on 58 minutes was a special piece of improvisation and finishing from the Frenchman, after Fernandes had slipped the striker into a goalscoring opportunity. The scoring was rounded off by 18-year-old Mason Greenwood, who received the ball from Fernandes before firing into the top corner.

The Portuguese was duly named Man of the Match and after the game spoke to the club’s in-house media about his first goal in his new home. “It’ feels very good. For me its another dream come true. The last weeks have been amazing for me. The penalty approach? I often do it this way but sometimes I change. Today I felt confident to take it like this.

“The fans are amazing, they give me more confidence to play and be happy to play. But also my teammates help me a lot, they give me a lot of confidence. They trust in me and this is really important for me.

“I’m happy. My family arrived on Friday, just in time to see me score. They were all here today.”

The win moved United above José Mourinho’s Tottenham Hotspur into 5th place, where they are just three points off Chelsea in the battle for a top four finish in the Premier League.

Very good performance for someone who hasnt been in the club long but continues his outstanding output...has really nade a difference to the players around him.

On anothe note...Andre gomes came on for 30 minutes and looked fantastic agaonst...

Very good performance for someone who hasnt been in the club long but continues his outstanding output...has really nade a difference to the players around him.

On anothe note...Andre gomes came on for 30 minutes and looked fantastic agaonst arsenal spraying passes, calm on the ball and driving forward..instant quality difference....needs to play as a central mid where he looks so good ...never has looked great on the flanks..

Jota on fire at wolves and is quite the unique player...will definitely be in Santos thoughts...can support ronaldo in attack as 2 like with Jimenez or play up top on the left as a 3...joao felix will need to show more form to make this Euros given the strength of attacking midfield and other attacker/strikers like jota who are doing very well

National team should they all be fit are spoiled for midfielders...hopefully Santos can find the balance.

Now ManU can move past the cancer that is Paul Pogba. Pogba's bs is great for NT supporters though, and I predict France crashing out of our group.