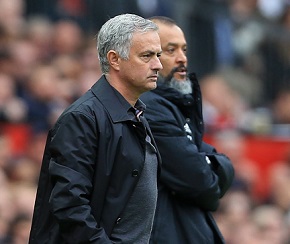 Diogo Jota was again the star man as Wolverhampton Wanderers twice came from behind to beat Tottenham Hotspur to strengthen their hopes of a top four finish in England.

Rúben Vinagre kept his place in Nuno’s side after impressing in the Europa League on Thursday, while Rúben Neves was restored to the line-up alongside João Moutinho in midfield and Rui Patrício joined the in-form Jota to make it five Portuguese taking the field. Mourinho, who was looking to avoid a third consecutive defeat, left January signing Gedson Fernandes on the substitutes bench.

The afternoon started well for the hosts, as another winter signing Steven Bergwijn gave Mourinho’s team the lead on 13 minutes, but Matt Doherty quickly drew Wolves level after good work down the left involving Jota and Vinagre. Serge Aurier’s classy solo goal saw Spurs go into the break 2-1 up, but the second half belonged to Wolves and in particular ex-Porto striker Jota.

First the Portuguese converted from just a yard out after good work from Doherty, but the winning goal came via sheer brilliance from Jota. Receiving possession well inside his own half, Jota spun evaded several Spurs defenders before finding Mexican forward Jimenez, who wrong-footed Aurier before finding the net with his left foot.

Both managers called on their Portuguese reserves during the latter stages, with Gedson playing the final ten minutes for Spurs while Pedro Neto replaced Adama Traore and Daniel Podence was a stoppage-time introduction for Nuno, who was delighted with his team when facing the media after the final whistle.

“We were relentless and stayed in the game,” he said. “We started the second-half much better, more organised, pressing, recovering the ball better and scored beautiful goals.

“Good movements and technical (goals) and it’s good for the fans behind the goal that we were able to come from behind at such a difficult stadium – a lot of credit.

“The way the boys ran, it’s amazing, the energy levels we put in the game. They recovered very well, it’s a challenge and when you really embrace a challenge, you give everything that you have, and this is what we are doing, giving everything.

Mourinho, however, was left to contemplate three consecutive defeats and insisted during his post-match press conference that Spurs did not get what they deserved from a well-contested match in the capital.

“I think it was a very good game with two teams not happy with a draw, two teams trying to win, two teams with a different style,” Mourinho said.

“Wolves are what we all know they are, incredibly fast and strong on the counter-attack. We are a different team and, without the strikers, we try different solutions. It worked in the sense that we managed to score goals, we managed to have some opportunities, managed to arrive in dangerous positions. I think the result is totally unfair to us, but that’s what it is.”

Wolves leapfrog Tottenham into 6th place as a result of their victory and move just three points behind 4th-place Chelsea in the battle for the Champions League positions. Mourinho’s men are now five points off the top 4.