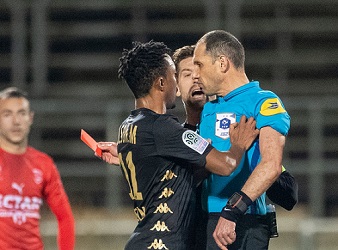 Gelson Martins’ season is over after the Portugal international was handed a six-month ban by French football's disciplinary committee for pushing a referee last month.

The Monaco winger received a red card for shoving Mikael Lesage during his side’s 3-1 defeat at Nimes on February 1st and was immediately given a provisional suspension while the case was considered. Thursday saw the verdict, and Gelson’s suspension will run until early August.

The incident came during the first half of the clash at the Stade des Costières. With the teams level at 1-1, Monaco midfielder Tiemoue Bakayoko was sent off after consultation with VAR, provoking Gelson to push Lesage and earn a red card of his own. The 24-year-old then pushed the referee a second time, with the story receiving strong condemnation from the referees’ union in France, who slammed the events as “shameful, intolerable, unbearable, indefensible, inadmissible and should not happen on a football pitch."

Gelson issued an apology the follow day, adding: “I apologise in particular to the referee but also to my teammates and colleagues. Those who know me know that throughout my career, I have always had respect for everyone as a principle: colleagues, opponents , supporters and referees, on and off the field.”

Despite the reaction being out of character and Gelson pointing to an exemplary disciplinary record, the disciplinary committee chose to enforce the predicted heavy punishment. Monaco released a statement later in the evening after the verdict, expressing their disappointment at the severity of the suspension.

“AS Monaco notes the decision of the Disciplinary Committee of the LFP to sanction Gelson Martins with a strong suspension of 6 months from February 6. A very heavy sanction. As the club once again condemns the unjustifiable behaviour of its forward, it regrets the excessive duration of this suspension, for a player who has never known a suspension in more than 200 matches at the highest level.”

Gelson joined Monaco on a permanent deal last summer from Atletico Madrid for a fee of €30m, having impressed during a loan spell in the second half of the 2018/19 campaign.