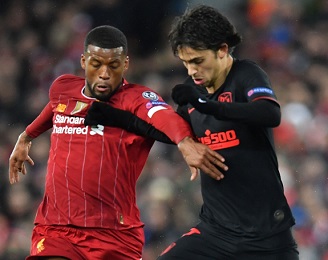 Atletico Madrid produced a remarkable extra-time performance to knock European champions Liverpool out of the Champions League at Anfield, with João Félix playing a central role in Los Rojiblancos’ victory.

Meanwhile, there was less to cheer for José Mourinho, who saw his Tottenham Hotspur suffer a heavy aggregate defeat to RB Leipzig, while Raphaël Guerreiro and Borussia Dortmund let slip a first-leg lead to suffer elimination in France against Paris Saint-Germain.

The story of the week was at Anfield, where La Liga outfit Atletico Madrid arrived protecting a 1-0 advantage from the first leg in the Spanish capital. Coach Diego Simeone selected João Félix in his starting line-up, after the former Benfica youngster started and scored in the weekend draw with Sevilla before being substituted.

Atletico surrendered much of the ball on the night, registering just 29% possession, as a Georginio Wijnaldum goal for the hosts sent the encounter to an additional thirty minutes. Roberto Firmino put Liverpool ahead early into extra time, but the Spanish side stunned Anfield with an equaliser just a couple of minutes later when Félix took advantage of a poor goalkeeping clearance and found substitute Marcos Llorente who finished well.

Félix was withdrawn shortly after the equaliser, leaving the field with the highest pass completion rate of any Atletico player and having managed to find two key passes as well as his assist. Another goal from Llorente and a late third from Félix’s replacement, Alvaro Morata, sent Atleti into the quarter finals with a 3-2 win on the night. Speaking after the match, the 20-year-old Portuguese admitted Atletico had to work tirelessly for their victory in a type of performance he is not accustomed to.

“It was one of the matches we have suffered the most this season,” he told Portuguese media. “We knew it would be complicated, because it is a stadium where few clubs win, but we managed and went through. I was not used to touching the ball so little at Benfica, but this is Atlético, it is how we play and I have to adapt. Today when I touched the ball I made two assists: one of them created a goal and the other was close.”

Félix was also asked about the compliments paid to him by Liverpool manager Jurgen Klopp before the match. “I saw what he said and tonight when I came across him I thanked him. I greeted him and he wished me good luck,” said Felix who issued “a hug to everyone, especially to Benfica fans.” 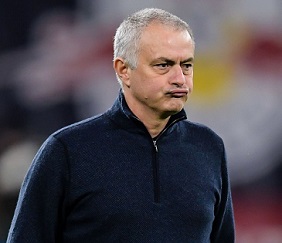 “Nobody could resist this situation” – Mourinho

José Mourinho’s Tottenham Hotspur are out of the competition after losing 3-0 to RB Leipzig in Germany to complete a 4-0 aggregate defeat. Spurs, who had lost the first leg 1-0 in London, started the game in reasonable fashion but defensive errors and a toothless attack inevitably led to a disappointing exit.

Mourinho has seen his side go six matches without victory, during which time Spurs have been eliminated from two cup competitions and slipped to 8th in the Premier League. Already without first-choice forwards Harry Kane and Heung Son-Min, Mourinho lost Dutch striker Steven Bergwijn before the match and the former Porto boss told reporters his team are less dangerous.

“They can hurt us, we cannot hurt them,” Mourinho said to BT Sports, before later adding that dropping out of the competition may benefit his side. ““People can say it’s excuses, but this is pretty bad for anyone. Nobody could resist this situation.”

"We cannot hurt people, they can hurt us."

"When you don't have more to give. You give what you can."

"We go until our limits, which is what the boys are doing."

Jose Mourinho on why individual mistakes and squad availability are hampering his Spurs project...

There was bad news on Wednesday for Portugal star Raphaël Guerreiro, who took to the field in a behind closed doors clash between Paris Saint-Germain and Borussia Dortmund. Guerreiro’s Dortmund travelled to Paris protecting a 2-1 lead from the first leg in Germany, but an empty Parc des Princes owing to the coronavirus saw the home side progress with a 2-0 win.

Guerreiro played the full ninety minutes for Dortmund in a left wing-back role, in which he recorded two key passes but struggled to influence the game during a poor team performance from the Bundesliga side. Dortmund are back in action this weekend with a highly-anticipated Ruhr derby match with Schalke 04 on Saturday.