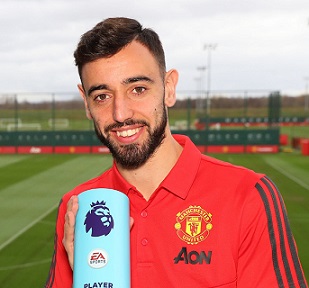 Fernandes has made a tremendous impact in English football with the Red Devils since his January transfer from Sporting. The 25-year-old has started eight matches and made one substitute appearance so far in all competitions, with a return of three goals and four assists coming as Fernandes has impressed all observers in the Premier League.

The Seleção man becomes the third Portuguese to win the Premier League Player of the Month, after Cristiano Ronaldo who won the award three times at United and Deco who took the prize with Chelsea in August 2008. Former Porto man Raul Meireles is among the winners of previous PFA Player of the Month awards.

Speaking to Sky Sports last week, Fernandes said: “We can talk about a new start after Bruno but it is not about Bruno, it is about the team. One player doesn't change a team. The team changes when everyone pushes together for the same side.

“But the support I receive from the fans since the first day is amazing. I listened to the song they do for me and I was like, ‘I have been here for two days and I already have a song!’

“The love they give me in this first month is really good.”

It's a shame that they're not playing right now.

This was our year to win the Euro convincingly. I guess Chinese black marketeers had something to say about that!

Really happy for him! Truly top player and a great guy as well!