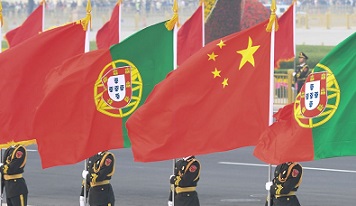 As Europe continues to struggle with the impact of COVID-19, the tentative steps back towards everyday life are being made in regions across China, following an extensive quarantine period.

One resident is Portuguese coach Hélder Silva, who works with the U14 and U15 Chinese national team sides and is based in the southern coastal province of Guangdong. Silva spoke with Maisfutebol earlier this week about his current situation and why he believes China’s example must be followed.

“We don't even know how we put up with it," Silva says of the enforced public quarantine which began in January and was lifted for his family to leave the house on Tuesday. "I watched a lot of football on TV, but now there is nothing," added the 39-year-old, who revealed his son Gonçalo, 11, and daughter Gabrielle, 8, took classes online while his wife taught English.

And with all football worldwide being stopped country by country, people have had to change their lifestyles and habits, and football gamblers have looked for alternatives, while they were available, such as aquí.

A former youth staff member at Crystal Palace in England, Silva is generous in his praise of the authorities for how the situation was handled: “They even provided a shopping service. Staying at home is very important, this is the only way to avoid contagion. In economic terms [it’s difficult].

"Portugal has to make drastic decisions. That's what they did here: nobody enters, nobody leaves.

"There are now more people on the street, but the temperatures continue to be measured and we have to give our address at the entrance of the all establishments. Wherever you go, there is security. As soon as I left the house, I slipped on a staircase. I'm all bashed up,” he added humorously.

Football in China is scheduled to resume, albeit behind closed doors initially, in mid-April as long as the current improvements are sustained. New domestic cases of the disease have stopped, with the remaining infections coming from those entering the country, making the problem far more manageable for authorities.

"I think the danger has passed,” says Silva. “I walk fine on the street, but I am worried when I am in places with a lot of people, I avoid smaller spaces.”