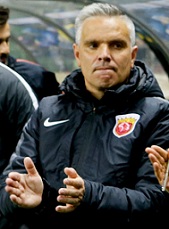 Luís Miguel is part of Vitor Pereira’s coaching staff at Chinese powerhouses Shangai SIPG, where he serves as assistant manager to his long-time colleague. As the Luso staff prepare to finally begin the 2020 Super League season, Miguel has been offering strong advice to those in Europe and especially his homeland in overcoming the current Covid-19 pandemic.

Shanghai are hoping to begin their league campaign on Thursday 16th April at home against Henan Jianye. However, for much of Europe the idea of resuming the football schedule feels far from imminent as the new coronavirus disease continues to cause damage and concern throughout the continent.

Miguel, 49, is clear in an interview with O Jogo on the seriousness with which people in his homeland must treat the crisis. “China is managing to control the deadly virus because it has a lot of respect and a lot of discipline,” he said.

“They had a lot of patience, they had to keep themselves at home, the economy stopped. But they stayed at home. It hurts me to see what’s going on in Europe. We had three months to learn from China and we underestimated the enemy. You can see what's going on in Italy, Spain, Iran ... I hope it doesn't happen in Portugal.”

Indeed, no date has yet been set for football in Europe to restart, but on the flip side Champions League New Customer Offers will be more enticing than ever when normal service resumes.

Miguel admits the lack of control at Lisbon airport took him by surprise.

“I was terrified when I travelled to China: at Lisbon airport nobody was protected, there was no temperature control - nothing. Those who work at airports come into contact with a lot of people. Here they are always measuring the temperature and people wear protective equipment.

“In China everything gets quarantined and if anyone breaks the rules, they’re severely punished. There is discipline. I advise: stop, stay at home with the family. Only one person should go shopping and with protection. When they return, disinfect their shoes, put your clothes in the wash and take a shower. Stop walking, going running, going into elevators, in busy buildings, coming into contact with people. In China, I didn't even see anyone jogging. It stopped the epidemic. It takes a lot of discipline, patience and respect for this virus.”

Miguel has worked alongside former Porto boss Pereira at Al-Ahli in Saudi Arabia, Olympiacos in Greece, Turkey’s Fenerbahce and 1860 Munich of Germany before joining him in Shanghai in 2018. The pair helped Shanghai SIPG to their first-ever national championship in their first season, before adding the Chinese FA Super Cup last term.